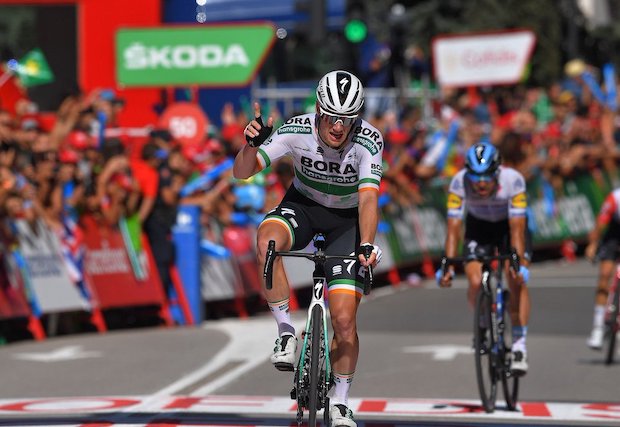 Sam Bennett launched a sudden attack in the direct aftermath of a mass fall on the home straight on Saturday to win stage 14 of the Vuelta a Espana at Oviedo.

Overall Vuelta leader Primoz Roglic missed the crash but was slowed down by it and remains 2min 25sec in the lead with two monster mountain stages on Sunday and Monday.

World champion and second placed Alejandro Valverde and third placed Tadej Pogacar ended up with cuts and bruises in the crash in a dramatic culmination of what had been expected to be a straight bunch sprint.

“I knew they’d be going full gas, I was lucky to avoid it,” said an exhausted looking Roglic.

After winning the first flat stage in Valencia last week Bennett set off after Max Richeze and Tosh Van der Sande as they suddenly found themselves advancing toward the line, with Bennett burning them off with ease.

He raised one finger in a tentative celebration at the line and later said he was asking if he had won.

“Because I wasn’t expecting to be in the mix I wasn’t concentrating and didn’t know if the breakaway had been caught or made it home,” Bennett said.

“I just kind of found myself in a small group after the crash and bided my time because they were going too fast. At 300m I went for it because I just wanted to get it over,” Bennett said.

Sunday and Monday will provide a deep test of Roglic’s resolve as the true climbers can test the Slovenian’s stamina before Tuesday’s rest day and the final week of racing.