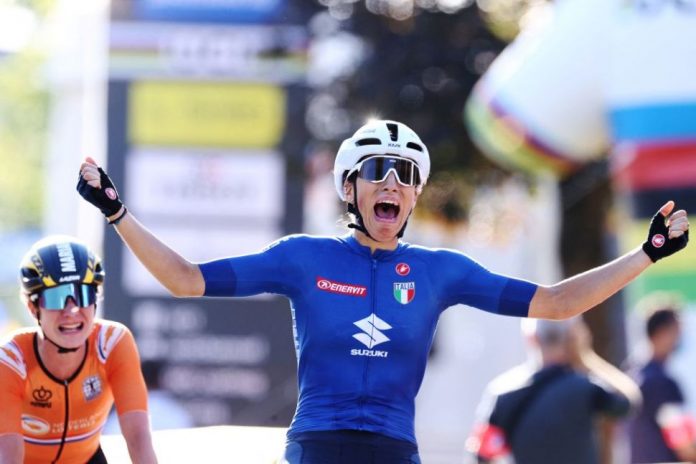 Balsamo, 32, benefited from veteran Elisa Longo Borghini’s selfless work in the final straight and started her effort far from the line to hold off Vos, winner of the title in 2006, 2012 and 2013. Katarzyna Niewadoma of Poland ended up taking third place.

Balsamo’s victory capped remarkable team work by Italy, who stayed together all day long on the 157.7km course from Antwerp to Leuven.

The Dutch looked to wear down their rivals by attacking one after another, including Demi Vollering after she fought her way back into the main group following an untimely mechanical. The moves, however, failed to disorganise the Italians.

Margarita Garcia opened a decent gap with about 25 kilometres left but the Dutch worked together and the Spaniard was reined in 10 kilometres from the line.

Vollering increased the pace to prevent further attacks as what was left of the peloton was fully stretched.

None of Vos’s teammates had the legs to set her up for the final sprint but the 34-year-old managed to tuck herself in Balsamo’s slipstream.

The 23-year-old track cycling specialist kept her composure and risked everything by launching her sprint far from the line to give Italy their first women’s title since Giorgia Bronzini in 2011. The Netherlands had claimed six of the 10 titles since, including the last four.

Defending champion Anna van der Breggen was never in contention in her last race as a professional rider.