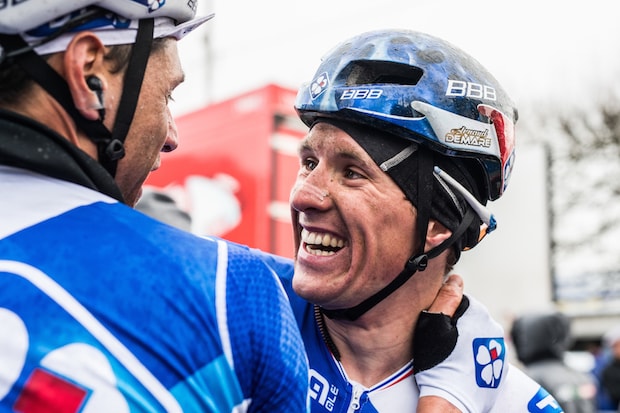 Arnaud Démare’s 2017 season has been almost flawless. The sprinter of the FDJ team took stage victories in Paris-Nice, Critérium du Dauphiné and Tour de France. The Frenchman also achieved the best result of his career in Paris-Roubaix finishing 6th.

Démare says that he will race more sparingly in 2018 in order to remain fresh for the cobbled classics and the Tour de France.

“Watching the sprinters raise their arms in Australia has given me the desire [to race], but the objective is to reach the Classics with a lot of freshness,” Démare said in an interview with the FDJ team website.

“These past seasons, and even though it’s been my objective, I’ve arrived in the period of Milan-San Remo, the Tour of Flanders and Paris-Roubaix feeling a mental fatigue that I absolutely want to be rid of in 2018.”

“I agreed straightaway with the programme proposed by the staff. It’s the same for the Tour de France,” Démare said. “Guys like [Michael] Matthews and [Marcel] Kittel get there with very few racing days. I had a third more than them in 2017. I want to concentrate on the essential, which is what the team wants as well.

“In 2016, I needed confidence and it was good to win at the Tour Méditerranéen but now I feel very confident and I don’t necessarily need to raise my arms immediately.”

“I’m going to keep progressing by continuing to do what I’m doing. We’re not all like Peter Sagan, who can battle with the champions at 22 years of age,” Démare said.

“I’m 26 years old now, I can cope well with big workloads, I recover well and I know that I progressed well in that regard in 2017. But there’s no rule: Greg Van Avermaet exploded at 29 or 30 years of age.”