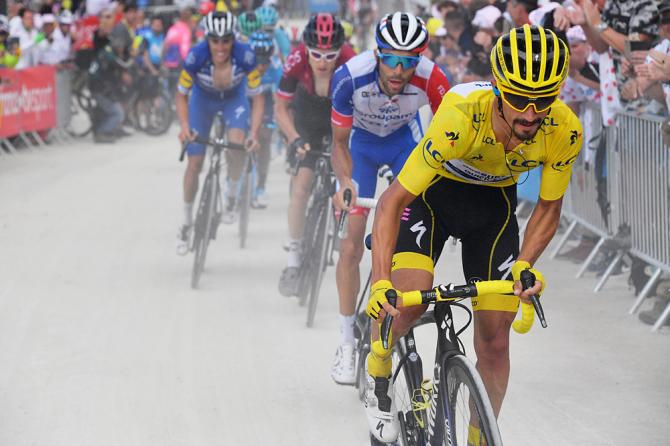 (AFP) – Tour de France leader Julian Alaphilippe admitted Monday his yellow jersey was “hanging by a thread” as the toughest, oldest race in the world heads into its final week.

The 27-year-old rider, looking to become the first Frenchman to win the Tour since Bernard Hinault in 1985, told reporters on Monday’s rest day that “the toughest is yet to come”.

Alaphilippe has worn the famed yellow jersey for 11 days and will start Tuesday’s stage 16 with a 1min 35sec lead over second placed Geraint Thomas, the defending champion wearing the colours of Team Ineos.

“One minute thirty ahead, that is a lot and very little at the same time,” said Alaphilippe. “One weakness on a mountain over 15, 20 kilometres and it is all over.”

Alaphilippe surprised most people by coming out of the Pyrenees on Sunday with his yellow jersey intact albeit with a slightly reduced lead.

After two relatively flat transition days, however, the race moves back into the mountains on Thursday with three stages in the Alps, each with a summit finish over 2,000 metres.

They culminate in Saturday’s penultimate stage at Val Thorens which has a total ascent of 4,450 metres.

“The climb up Val Thorens will be terrible right up to the summit,” said Alaphilippe. “When I look at the profile of these stages in the Alps, I tell myself that my jersey is hanging by a thread.”

Alaphilippe was at pains to play down his chances of holding on to the yellow jersey until Sunday when the race ends on the Champs Elysees in Paris.

“We don’t have the team to win the Tour,” he said. “We knew well that in coming here with three leaders we couldn’t have five riders around each one.”

“To take the ultimate victory, we need climbers and today that is something we are lacking so we mustn’t dream about it,” he said.

Alaphilippe’s concern about the final week is in contrast to the positive vibes coming out of Team Ineos.

“If (Alaphilippe) pulls it off he’s on another level to everyone,” said Ineos boss Dave Brailsford. “If he was to win this race he’ll be one of the greatest riders of all time.”