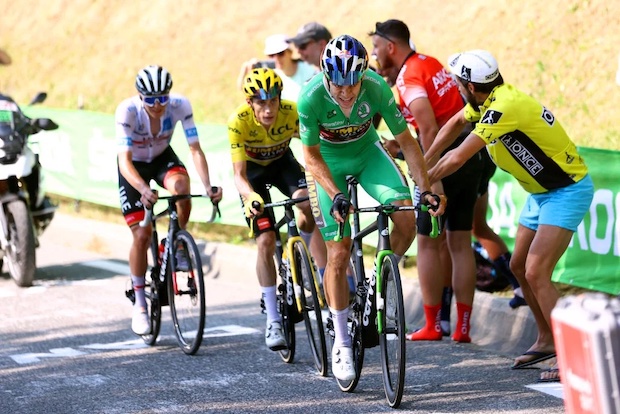 Aart Vierhouten, sports director of UAE Team Emirates at this year’s Tour de France, believes that Wout van Aert was the one who “killed” Tadej Pogacar, not Jonas Vingegaard.

Vierhouten specifically talks about the fifth stage of the Tour, the cobbled stage from Lille to Arenberg. Pogacar rode ‘very well’ that day, but he still lost the race, thinks his sports director. Jumbo-Visma had to deal with a setback during the stage – Vingegaard had technical problems and Primoz Roglic fell – but that turned out well in the end, Vierhouten believes.

“They were actually lucky that Roglic fell, so in that stage they could do nothing but choose Jonas as their leader. If they had postponed that choice, it would have played into our hands.”

The greatest ‘luck’ for Jumbo-Visma, however, was that Van Aert no longer had a chance at the stage victory due to falls, says Vierhouten. The Belgian thus adapted to his role as a helper for Vingegaard.

“Tadej was good, but we were unlucky that we ran into a ‘superman’ that day named Wout van Aert. He took the lead in the Vingegaard group and closed a gap of two minutes on Pogacar in the last 20 kilometers.”

“If Van Aert would had been in the leading group with Pogacar, Jumbo-Visma wouldn’t knew what to do: force Wout to wait or try to win the stage? Then we would have won the Tour there. Because without Van Aert, Vingegaard would have fallen behind Pogacar, which he could never have made up for in the mountain stages.”

In the end things turned out differently. Vingegaard attacked in the stage to the Col du Granon and won the yellow jersey there. Pogacar finished second in Paris, 2 minutes and 43 seconds behind the Dane.