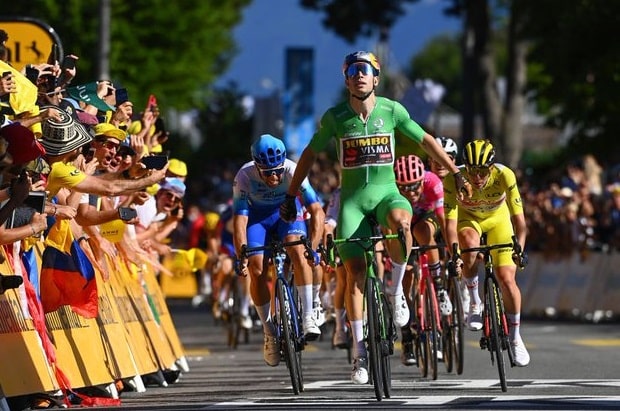 Wout van Aert consolidated his lead in the Tour de France points classification with a late burst of speed on Saturday to win the eighth stage of the race, a hilly 186.3-km ride from Dole to Lausanne across the border in Switzerland.

The Belgian bagged his second stage win in this edition in a reduced bunch sprint at the top of the Cote du Stade Olympique, a 4.8km effort at an average gradient of 4.6%.

Green jersey holder Van Aert, who now has a 115-point lead in the points classification over Fabio Jakobsen, beat Michael Matthews after launching his sprint with 200 metres left.

“Before the Tour we had marked the Longwy and Lausanne stages for me,” said Van Aert.

“I’m very happy, very proud to finish off the work of the team. The climb was not too long. On the steepest parts I was on the limit but I knew the last 200-300 metres were flatter.”

Sunday’s ninth stage is a 192.9-km mountainous trek from Aigle, Switzerland, to Chatel back in France as the threat of COVID-19 loomed large on the race.