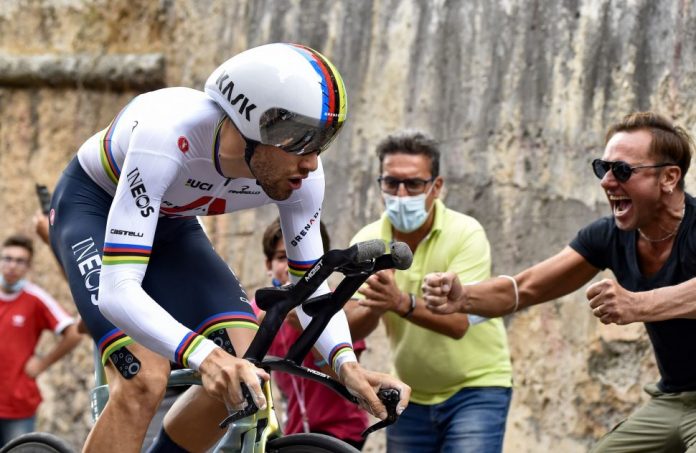 Filippo Ganna won the opening stage of the Giro d’Italia on Saturday, a 15.1-km individual time trial between Monreale and Palermo, to claim the first Maglia Rosa of this year’s race.

The Ineos-Grenadiers rider, who claimed the time trial title at the world championships last week, clocked 15 minutes 24 seconds to beat Joao Almeida by a massive 22 seconds.

“I’m really happy. This jersey is fantastic for me, and my team will also be happy. I say a big thank you to them, for all the support to arrive in pink at the Giro,” Ganna said.

Geraint Thomas, also from Ineos-Grenadiers, was the best of the pre-race favourites when he took fourth place with a time of 15:47 with his compatriot Simon Yates losing 26 seconds to the 2018 Tour de France champion.

Two-time champion and home favourite Vincenzo Nibali had a disappointing ride, finishing 1:06 behind Thomas, with Jakob Fuglsang and Dutchman Steven Kruijswijk also losing precious time – down 1:24 and 1:21 on the leader, respectively.

Astana lost Miguel Angel Lopez, sixth overall in the Tour de France, who was taken into an ambulance after crashing heavily when he hit a bump on the road.