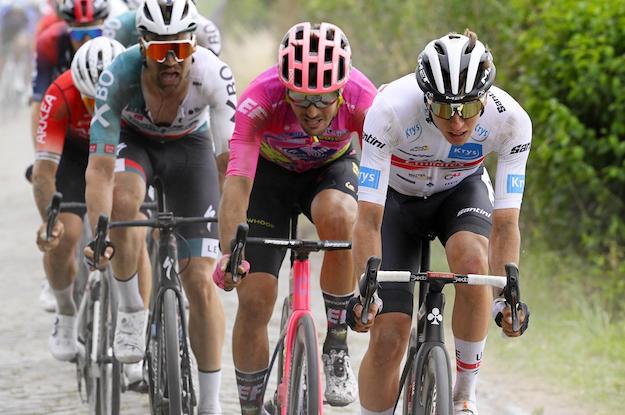 Despite making multiple signings in the off-season, UAE Team Emirates has failed again to offer key support for Pogacar so far at the Tour de France.

This was never clearer than during stage 5 when he was isolated almost as soon as he hit the cobblestones and only got significant help from Alberto Bettiol and Jasper Stuyven.

EF Education-EasyPost nearly pulled off a perfect day by getting both Magnus Cort and Neilson Powless into the early move. This set them up to both win the stage and get Powless into the race lead, which would have been very important for the American team and their battle with the WorldTour relegation.

But, outside of missing out on the stage win, they blew a chance at the yellow jersey plans partly due to their own teammate, Bettiol, working with Pogacar to pull back their gap when the GC group hit the cobblestones. The reasons for this are completely unknown and the logic is baffling.

“Tadej told me ‘Let’s go, Alberto!’. I told him I can’t pull too much because I have two guys in the front, I just wanted to break the peloton,” said Bettiol for Gazette dello Sport.

“I think there will be some harsh words spoken in that team – and there should be,” said Robbie McEwen. “It was horrendous”.

“You’ve got Magnus Cort and Neilson Powless in the breakaway with a healthy lead – Powless is leader on the road. And then his teammate [Bettiol] back in the bunch starts drilling it across the cobbled sections with Pogacar in his wheel.

“Someone’s going to have to ask him why. You can only assume that he’s possibly going to UAE [Pogacar’s team] next year. Any other reason you’d do that is beyond me.”

With 2 EF teammates ahead in G1 hunting stage & yellow, Bettiol:

– moves to the front of G2
– says something to Pogacar
– starts pacing very hard
– checks multiple times to see if Pogacar is in his wheel pic.twitter.com/rCsEU8gOeU