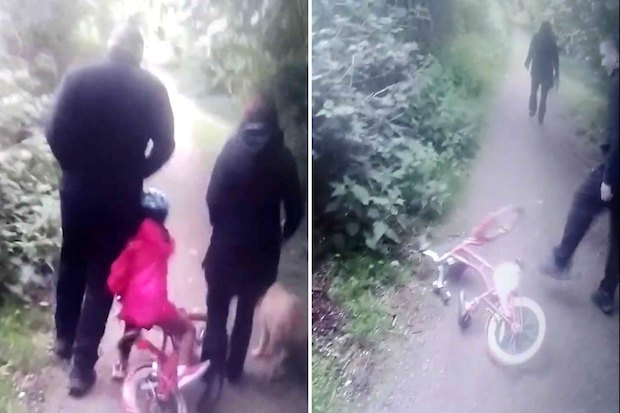 A young girl was cycling in Derbyshire with her dad when a man and woman failed to get out of the way and she fell off her bike as she tried to get past them.

The girl can then be heard crying loudly after the incident, before the dogwalker kicks her bike and walks off. The footage has caused much anger on social media after being shared by the girl’s mother Michelle Prost. She posted the video with the caption: “So this couple purposely ignore my 6 year old daughter ringing her bell and saying excuse me. She starts screaming and wobbling in panic. The man turns and looks at my daughter, then the couple look at each other but continue to ignore her on purpose. She then rides into them in panic. She is new to going on bike rides, this has really upset her. The man gets verbally abusive and says ‘so f***ing what?”

He said excuse me 3 times prior to this as well 🤷🏻‍♂️ takes a second to step to one side 🤯 the little girl won’t want to bike again pic.twitter.com/DbRRdueDOV