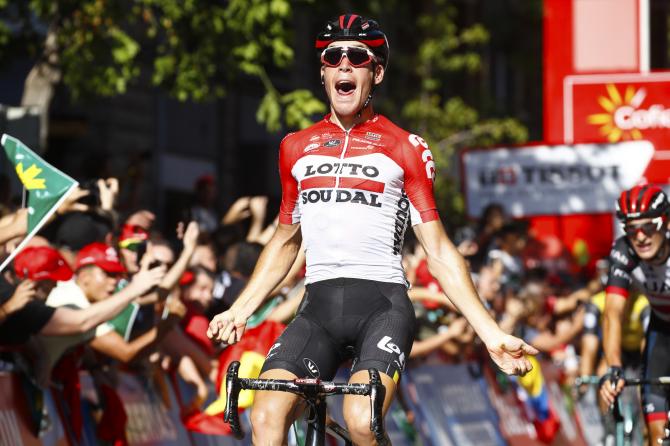 Jelle Wallays (Lotto Soudal) held his nerve Thursday to win the 18th stage of the Vuelta a Espana, with Simon Yates (Mitchelton-Scott) retaining his overall lead.

Yates remained 25 seconds ahead of his nearest rival Alejandro Valverde, in the general classification. Another Spaniard, Enric Mas stayed in third, 1min 22sec behind the red jersey.

“It was ok today until the final, it was very fast because of the wind and that made it hard, but for the rest it was a nice day and probably the easiest of the race so far. I am looking forward to tomorrow now,” said Yates.

“I was just trying to (be) safe with my positioning in the final, there was quite a lot of roundabouts coming into town and up near the front is the safest place to be. I wasn’t thinking of bonus seconds.”

Friday’s 19th stage is a mountainous 154.4km ride from Lerida to the Naturlandia nature park in Andorra.

Wallays was left happy his risk-taking paid off, praising ex-French rider Thomas Voeckler for his words of wisdom after the duo had shared a sprint finish, won by the Frenchman, back on the Paris-Tours in 2014.

“Today I applied a lot of the advice he gave me: stay cool, ride quietly because everybody wants a sprint,” the 29-year-old Belgian said.

“I put all my cards on the table, I had no fear of losing. I was already happy to have put on a show for the public in the last kilometre.”