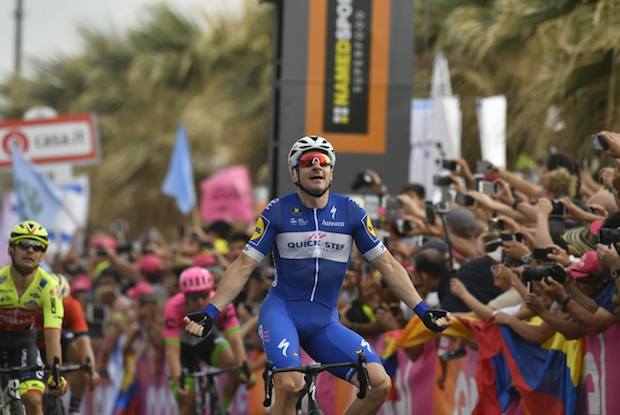 Elia Viviani (Quick-Step Floors) was the strongest in the chaotic stage 2 sprint finish in Tel Aviv at the Giro d’Italia. The Italian lost his lead-out train but played it cool to beat Jakub Mareczko (Wilier Triestina) and Sam Bennett (Bora-hansgrohe).

Enrico Barbin, of Bardiani–CSF, was the first to the summit in the solitary climb in the second stage to clinch the blue jersey in Tel Aviv.

Viviani was well off the pace with less than two kilometers to go but the Italian powered home to win comfortably ahead of Mareczko and Bennett.

“It wasn’t easy to win. I’m usually calm but it wasn’t easy to do well after a good start to season but then a stop, then starting again. I felt the pressure that I was the rider to beat,” Viviani said.

“It was difficult to stay together in the finale, so I used the team to keep the speed high. Then I got on Bennett’s wheel. The others hesitated but I knew somebody would do something and was ready. When Mareczko I got on him and then did my sprint. It was important to read it right.”