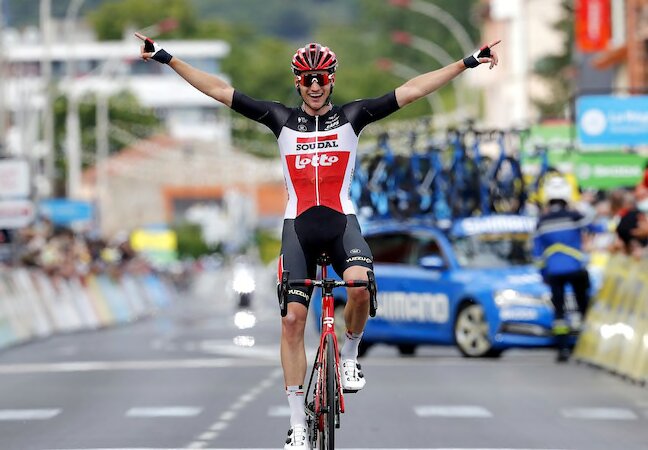 Brent Van Moer won the first stage of the Criterium du Dauphine on Sunday, a first career victory that saw him also take hold of the leader’s jersey, the young rider’s jersey and the king of the mountains jersey.

You can rewatch STAGE 1 of 2021 Criterium du Dauphine HERE

With major stars such as Geraint Thomas and Chris Froome on the roster and a mountainous itinerary, the Criterium du Dauphine is a key warm up for the Tour de France which embarks from Brest in four weeks.

Thomas won here in 2018 before going on to win the Tour, and is backed by some impressive firepower with Tao Geoghegan Hart, Richie Porte and Michal Kwiatkowski rolling with the Welshman.

Van Moer, part of an early breakaway over seven hills, resisted efforts to reel him in by the main peloton which was left to mass sprint for second place after the 181.9km stage.

It was a stunning result for the 23-year-old, who crashed out of the 2020 Dauphine on the very first day last August.

“I wanted to prove I can finish things off with a victory… and I’ve done it on the Dauphine,” he said after outlasting three other escapees.

Sonny Colbrelli came across the line in second, 25 seconds off the pace.