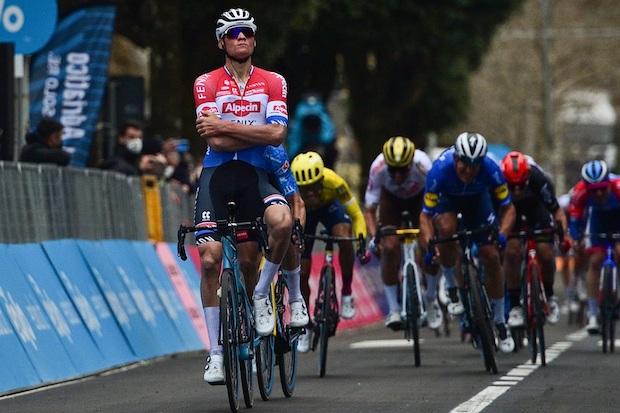 Mathieu van der Poel won the third stage of the Tirreno-Adriatico with an impressive sprint after 219 kilometres from Monticiano to Gualdo Tadino to beat Wout van Aert in yet another episode of the two riders’ rivalry.

In the eight races they have started together, Van der Poel, Van Aert and world champion Julian Alaphilippe have not let anyone else take victory.

“I was frustrated after the mistake I made yesterday so I wanted to do everything right today,” said Van der Poel a day after Alaphilippe won stage two.

“I’m really happy to take this win, especially after the work of the team. It was a really hard sprint after a long stage. It hurts. I really wanted to win a stage of Tirreno-Adriatico.”

Overall, Van Aert leads Van der Poel by four seconds. However, the overall rankings are set to be re-shuffled as sprinters and one-day race specialists should make way for the climbers in Saturday’s fourth stage, a 148-km trek from Terni to Prati di Tivo.

Ineos Grenadiers leaders Egan Bernal and Geraint Thomas will need to regain ground after they lost 18 and 19 seconds, respectively, after being caught behind a crash with 3.5 kilometres to go.