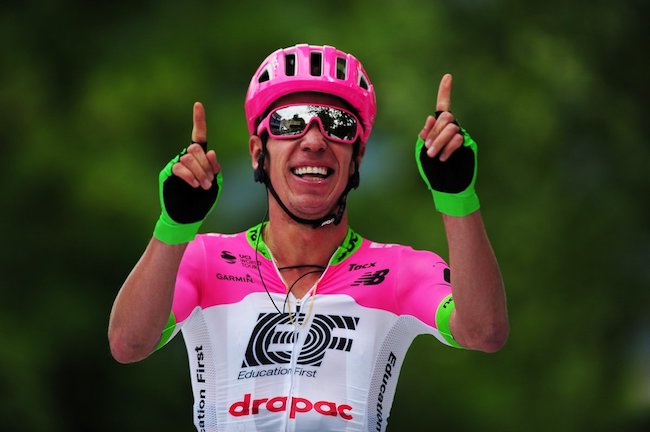 Roglic was a late-race attacker, reeled in with the finish line in sight, while Impey opened the sprint, but it was Uran’s perfectly timed kick that netted the stage win and the green race leader’s jersey.

“My feeling today was really, really good,” said Uran. “For me, the most important is the Tour de France. This race is preparation for the most important goal. We knew the final would be good for me because it’s up and the last two kilometers is really hard, so the idea for this stage was to win.”

A surprising breakaway dominated the early action. Marcel Kittel (Katusha-Alpecin) and Roger Kluge (Mitchelton-Scott) gained a maximum advantage of five minutes over the peloton in the opening hour of racing.

The peloton had pegged the breakaway’s advantage back to around one minute as the race hit the base of the category two climb that began 23 kilometers from the finish. LottoNL-Jumbo forced the pace, overtaking first Kittel and then Kluge, on the lower slopes of the 7.5-kilometer climb. Approaching the KOM, Uran had made a 10-rider selection with a small gap over a 16-rider chase.

Primoz Roglic (LottoNL-Jumbo) put in a little dig over the top of the climb and carried a small gap as he plunged down the descent. Matej Mohoric (Bahrain-Merida) overtook his compatriot on the downhill.

“The groups came together, and the selection after the second to last climb was about 20, 25 guys,” said Uran. “I felt good, and I said ‘ok, wait for the sprint, only the sprint.’ I know Roglic is here and that he’d like the final, too, but for me it’s about the preparation, and I need to wait for the sprint to see what I could do there. I had good legs, and I wanted a nice result for myself and for the team.”