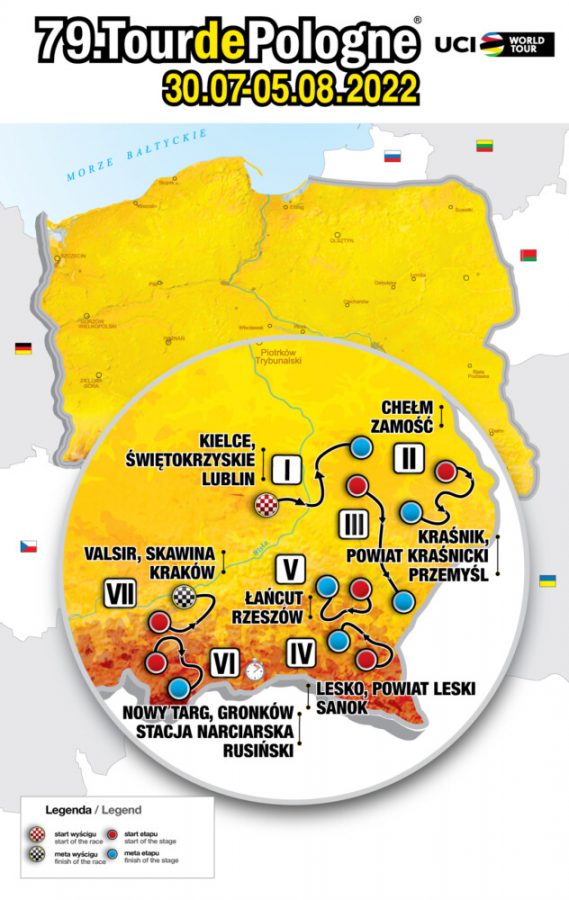 The Tour de Pologne 2022 starts on the 30th July 2022. This 79th edition will consists of 3 stages for sprinters (1,2 and 7), three hilly stages for puncheurs (3,4 and 5) and one uphill decisive time trial.. This however is on paper and nobody can fully predict the outcomes.

At first sight, this stage is reserved for sprinters but an uphill raise at 6.7% at around 500m could put some of the heavy sprinters on the back foot. Nothing will be lost though if they are well placed and could still fight back the position lost.

Any sprinters who would have missed the previous day sprints will be on fire to win this sprints more suited to them.

An uphill sprint that will reward the most powerful guy.

This is not a day for the pure sprinters. The eventful finish consists of 3 successive categorised climbs followed by a 1.5 km uphill drag that will rejoice the puncheurs and classics riders.

The last 3 km will be the opportunity for a strong puncheurs or powerful rider to snatch the leader’s jersey.

Depending on the race situation, this stage can reward a good climber with decent descending skills. The latter will nevertheless need the backing of a good team as a break away has a good chance of taking it as well

The 8.3% drag could still punish some rider after a long difficult day.

Not a typical mountain stage with a mountain top finish. There will be opportunity for riders dropped on the climb to make it back in the descent.

The highlight of the Tour de Pologne. An 11.6 km uphill time trial.

The opportunity to filter out some spinters will be here but it will depends on the willingness of the teams to take the race on and most importantly the energy and men left.

After suffering a crash, Biniam Girmay was removed from the startlist and he will be missed. Arnaud Demare leads the way for the most famous sprinters with Mark Cavendish. After finally showing some form in Eschborn Frankfurt, Sam Bennett went off the radar and his form will be highly awaited here. Kaden Groves of Team Bike Exchange will also be in play. Even with just one win since joining Team Ineos Grenadiers, Elia Viviani should be considered with these A list sprinters. The fastest man and the one everyone will be wary of remains Olav Kooij though

There is a non exhaustive list of riders who could take stage win on those hilly stages. The usual classics protagonists will need to mix it up with those fast puncheurs.

We will see plenty of bobbling with Mauri Vansevenant in this race as well as Mauro Schmidt. Both are attack minded riders that also do well in time trials. Andrea Vendrame has the possibilty to be in the mix for 6 of the stages. Much will be awaited from young Felix Gall. After an explosive start of the season, the Ag2r rider suffered at the beginning of the Giro before finding some form in the last week. Nans Peters is another good puncheurs who can challenge the best on his best days.

Sean Quinn, Hugo Page, Davide Cimolai and Edward Theuns are similar type of riders. Not the A list Sprinters but definitely one of those that passes climbs fairly ok and will rejoice themselves in reduced sprints.

Stephane Oldani, Diego Ulissi, Quinten Hermans And Sylvain Moniquet are breakaways experts. They also have some decent turn of speed that could prove useful on those punchy finishes.

Tobias Johannessen is an emerging rider from UNO-X. He will not be satisfied with just following the best on the steep gradients. He will be the one blowing things apart.

Koen Bouwman is a rider that has completely exploded by not only winning the KOM at the Giro but also 2 stages wins. He did also get into several breakaways and will be dominating here. Thymen Arensman is another one of the animator of the last week of the Giro. He can climb with the best and with his TT abilities he could aim for more here in Poland

Sergio Huguita and Richard Carapaz would have definitely prefered mountains but they nevertheless poccess enough power to handle group finishes.

The winner of this Tour de Pologne will have to show an mixture of powerful uphill finishes and some excellent uphill time trial abilities. Ethan Hayter has defined himself as not a sprinter.  He is however one of the fastest man, will get easily over those climbs and in a expert time-trialist. Close to him is Pello Bilbao, although not bad at time trial, he is some way behind the very best but he should not be discounted.

Very disappointed of missing the Tour through injury, Michal Kwiatkowski would relish the chance to win his home tour. The terrain fits him perfectly. the only uncertainty concerns his form and the freedom he will be given. The same could be said about American sensation, Magnus Sheffield.

Team Trek Segafredo have got themselves two gems for the future in Daan Hoole and Antonio Tiberi. Both are more than decent time trialist. Although their physique and style differs in that Daan Hoole is a huge guy with some insame power that can get over short climbs. Antonio Tiberi is a junior ITT champion that has been working and made a lot of progress in climbs. He usually packs that final km push that has won him podium finishes and even beat Eddie Dunbar in Hungary.

The 21 year old will absolutely explode in this race. Howeever his inexperience might cost him the first place but a podium is totally feasible

We have not see him since the Giro ended. If he shows the same form as the start of the season. He will be in the top 5.

They both would have enjoyed a more difficult course, but they both have the team to make the race difficult and make their slight deficit in the TT negligeable.

While the ex wrold champion form is a little of the unknown, anything close to his best will make him the man to beat.

Pello Bilbao will enjoy the short climbs and the long descent. The time trial is not totally to his disadvantage either as he is a ready that usually at his tempo.

He can potentially win all 7 stages! That is enough said.