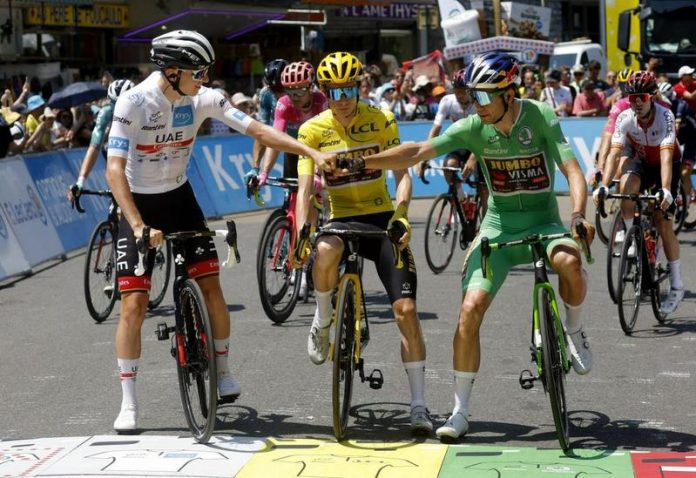 There is nothing to play for anymore  in this thrilling and amazing Tour de France 2022. Unless drastic circumstances, Jonas Vingegaard will wear the Maillot Jaune and the Maillot à Pois on the Champs Elysees. Tadej Pogacar and Geraint Thomas will accompany him on the second and third step of the Podium respectively. Wout Van Aert will wear a Green jersey that he had no competition to and Team Ineos Grenadiers will finish as the best team

There will lots of exposed roads to winds of 20km/hr and the possibility of Echelons is real. But only Nairo Quintana has the teammates and abilities with a realistic goal to force a split.

The sprinters have suffered way too much in this Tour de France 2022 to let this sprint served on a platter slip up. However, bruised and knocked out they are, they will have their team chase down breakaways with everything they have left.

It does not take much to know that positioning in the last km is essential. Too far back means a lot more work to do to come back and at the front too early is suicidal, unless you are Wout Van Aert.\

5th on the last sprint finish. While it initially seemed to be wise move by Bora Hansgrohe instead of Sam Bennett, a stage win will put this decision beyond doubt as nothing we have seem from the Irishman this season indicated he would have survived the mountains.

At the start in Copenhagen, there were no big expectations from him. He did show that he was in better shape that we thought. He does not have the same power as the best sprinters but a win should not go down as a surprise.

Finally, a well deserved break away win for one of those entertainers of the 3 weeks?

He lived a nightmare these last two days and he will miss the best lead out man in the world. He nevertheless remains the fastest man at the moment and will strike if well placed.

With the absence of Morkov, he now has the best lead out in Jasper Stuyven. He has been exceptionally well placed in all sprints on this Tour only to be beaten by sprinter with bigger explosive power. He should never be under estimated on a uphill sprint.

Another big fan of uphill sprint. His win a few days ago is proof that he is always a threat and could add a second victory here.

Where does this man stops? We have been asking ourselves this question since the first week and he seems without limit. Don’ expect him to be saving energy for the next day’s time trial, he will be going full gas like he always does and it will be nearly impossible to beat him.

The only big sprinter not to have won a stage in this Tour. The way he got over the last 2 mountains stages is an indications that he is over all his wobbles and the form might be coming back. He does not have a proper sprint train but he has enough man to place him decently on an uphill finish. He will need to take the wheel of Wout Van Aert or Mads Pedersen and wait until the last meters to win it on the edge!

Some final words from Gsipp00 :we have seen a lot of amazing things in this tour one being Caleb Ewan suffering the last week and stayed in when other GT he dripped out at the first time the climbs started. Secondly Fabio Jakobsen getting to the line seconds under the time limit…fate says these two should win today or stage 21.

Make sure to tune as from 1250pm Central Europe, 0650am U.S. Eastern on cycling.today or cyclingstream.com to watch the race free and live with us!