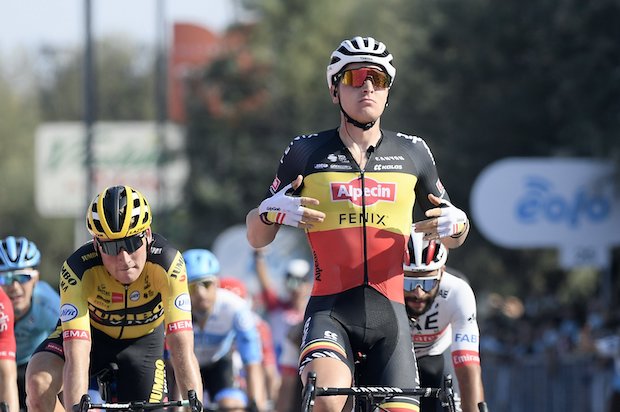 Belgian champion Tim Merlier won the sixth stage of the Tirreno-Adriatico race in a mass sprint and Simon Yates held onto the overall lead on Saturday.

Strategically drafting behind the other challengers until the last 100 meters amid crosswinds, Merlier then surged in front to win by almost an entire bike length. Pascal Ackermann crossed second and Magnus Cort came third.

“The team brought me perfectly to the sprint,” said Merlier. “We took the left side of the sprint, the one most exposed to the wind but it proved to be the right choice. The last few stages have been hard for me with so many climbs, I was just trying to finish within the time limit. I’m happy I can finally celebrate today.”

The 171-kilometer route from Castelfidardo to Senigallia started out hilly then turned completely flat, enabling the main pack to easily chase down an early breakaway group and set up the mass sprint alongside the Adriatic coast.

Stage 7 on Sunday is an undulating 181-kilometer leg from Pieve Torina to Loreto featuring an uphill finish.

“Tomorrow it could be a more challenging stage but we have a strong team to defend the blue jersey,” Yates said.

The race ends on Monday with a 10-kilometer individual time trial in San Benedetto Del Tronto.