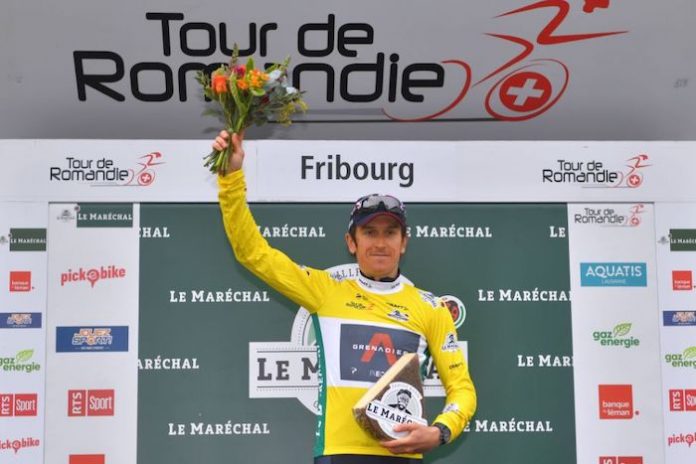 Geraint Thomas atoned for his slip the day before by powering through the closing time trial on Sunday to take overall victory in the Tour de Romandie.

You can rewatch STAGE 5 from 2021 Tour de Romandie HERE

A day after falling off his bike meters from the finish line, Thomas slowed on trickier sections late in the stage but still finished third, 17 seconds behind the winner Remi Cavagna.

Michael Woods, who held an 11-second lead after winning on Saturday, finished 28th, a minute and 11 seconds behind Cavagna and dropped to fifth overall.

Thomas claimed his first victory in a stage race since 2018, when he won the Tour de France.

“I’m very happy, especially after the little mishap yesterday which wasn’t ideal and definitely made it more of a challenge today,” said Thomas. “I would have loved to have gone for the stage but that last descent was a bit wet so it was just take it steady and finish the stage.”

“Felt good, reminded me of when I won the Tour,” he said.

In the 2018 Tour, Thomas finished third in a time trial on the penultimate day to seal victory.

“A similar sort of stage,” said Thomas. “The last descent with the team on the radio telling me to take it easy, don’t do anything stupid, don’t crash on the corners, and then obviously overthinking a bit.”