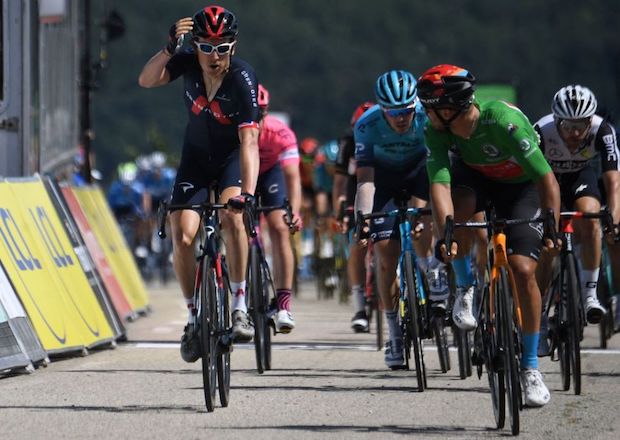 Geraint Thomas took a spectacular victory on stage 5 of the Criterium du Dauphine, after a sneak attack that ended in a photo finish with Sonny Colbrelli.

You can rewatch STAGE 5 of 2021 Criterium du Dauphine HERE

Coming into a corner a kilometre out and leading the pack Michal Kwiatkowski slowed to allow Thomas to open a small gap that he held but almost lost at the last gasp.

“It wasn’t planned,” Thomas said. “I knew Bahrain didn’t have any guys left – only Jack Haig, who’d been riding. I knew it was all lined out and the last bit was a bit twisty so I just thought ‘sod it, go for it’. I went with a kilometre to go, the boys said on the radio that I had a gap, and I just went all in.

“To be honest, I didn’t think I had that on the line. I just sat up two metres from the line to start to give it the big one, but man, Colbrelli came past so fast he nearly took my helmet off. But it’s really nice to get that win for sure.”

Friday’s sixth stage takes in four mountains in the final 50km of a 167.2km run from Loriol-sur-Drome to Le Sappey-en-Chartreuse.