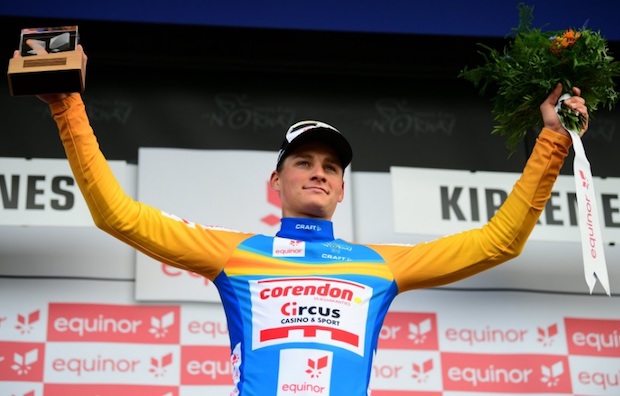 Mathieu van der Poel (Corendon-Circus) claimed the first stage of the Arctic Race of Norway after the Dutch rider was the fastest at the uphill finish in Kirkenes.

The Dutch road race champion, and former world and European cyclocross champion, demolished the uphill sprint as Sergei Chernetski (Astana) and Benjamin De Clercq (Sport Vlaanderen-Baloise) were second and third at the end of the stage.

Van der Poel also took the lead of the general classification and has 10 seconds lead over Guillaume Martin, 23 seconds over Warren Barguil and 35 seconds over Jakob Fuglsang, the big favourites to win the race.

“It feels good to win this race,” Van der Poel said. “It was a pretty hard day. I was at the back in the beginning when a group went away. I didn’t expect it because the wind was blowing from behind, so I didn’t think such a big group would go. The pace was incredibly high all day. Even in the bunch, it was hard because of the wind. On the local lap at the end, it was just a question of staying at the front. The last curve was very important. But I was in a good position there.”