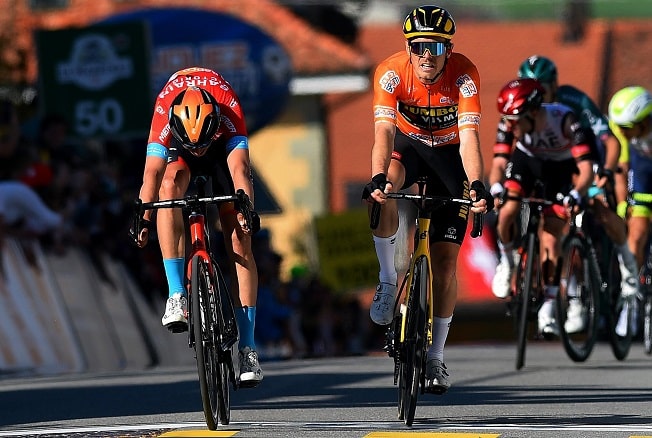 Dylan Teuns took the first stage of the Tour de Romandie on Wednesday, edging Rohan Dennis at the line.

Dennis took the overall lead after finishing second in the 5km prologue time trial the day before.

After a breakaway group was caught just before the end of 178km stage from La Grand Beroche to Romont, Dennis attacked on the short climb to the finish but Teuns followed and caught Dennis at the line.

“It was a very, very hard sprint. I only started to believe in victory only in the last 25 meters,” said the stage winner.

The pair finished two seconds ahead of Marc Hirschi.

Dennis took the green leader’s jersey from young Briton Ethan Hayter of Ineos, who was caught in a crash with 15km to go.

Dennis is 16 seconds ahead of Austrian Felix Grossschartner of Bora Hansgrohe and last year’s winner Geraint Thomas of Ineos.

“The shape is good on short climbs and in short prologues my form is good,” Dennis said at the finish.

“I think that I need to lose a little bit of timber off the rear end to be able to go up the climbs on Saturday as well as some of what some of these other little guys can do. Every day I’ll ride to the finish line as hard as I can and see what happens with GC, but I’m not saying that I’m one of the favorites, even after yesterday and today.”

What a comeback 💨@dylan_teuns snatches victory from Rohan Dennis in a thrilling conclusion to Stage 1 of the @TourDeRomandie!#TDR2022 🇨🇭 | @BHRVictorious pic.twitter.com/gAXlAIHuxt