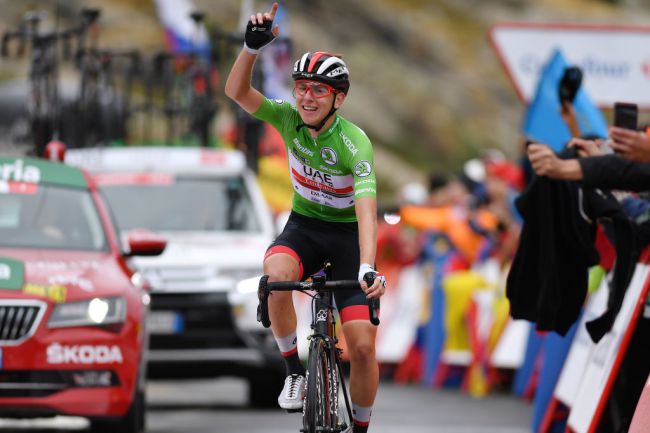 Primoz Roglic is poised to win his first Grand Tour after protecting his comfortable lead of the Vuelta on a rainy and mountainous penultimate stage on Saturday.

Roglic had little trouble responding to the attacks by his rivals over the 190-kilometer ride with five categorized climbs from Arenas de San Pedro to a summit finish at Plataforma de los Gredos in the mountains west of Madrid.

Barring an accident or some unlikely mishap, Sunday’s arrival to Madrid will be a relaxed jaunt for Roglic and his Jumbo-Visma teammates to celebrate the title.

The Slovenian, who turned to cycling after giving up on his first sport of ski jumping in 2012, leads world champion Alejandro Valverde by over 2min33s heading to the final day.

Roglic said despite a couple of crashes and the strong winds on stage 17 that Nairo Quintana used to get back in contention, he never feared for his lead.

”For sure it was not the easiest Vuelta,” he said. ”But I had a strong team around me and we managed to keep everything in control.”

He said his next goal could be a shot at the Tour de France.

Fellow Slovenian Tadej Pogacar confirmed he is the surprise of the race by pulling off a long solo attack to win the stage in just over five hours, moving him into third place overall. It was the 20-year-old Pogacar’s third win of the race.

”It’s really incredible. I don’t think I was ever imagining this, but I think I will need a few days to understand it,” Pogacar, who rides for UAE Team Emirates, said. ”I felt good on the long last climb. I chose the right moment and went full gas to the finish.”