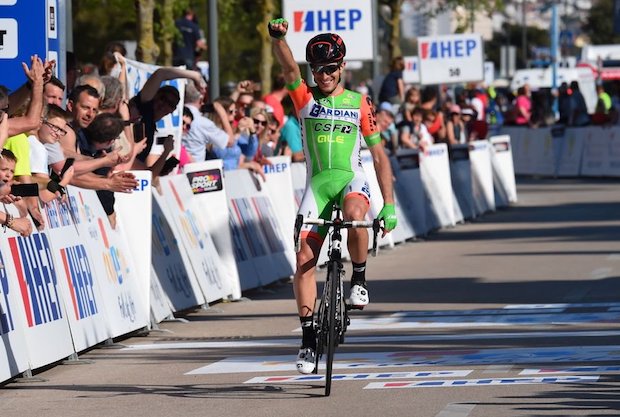 Alessandro Tonelli (Bardiani-CSF) took the win on the fourth stage of the Tour of Croatia on Friday, coasting in 12 seconds ahead of teammate Enrico Barbin, Jan Tratnik (CCC Sprandi Polkowice) and the rest of the main peloton.

“This is my first win as a pro and I’m very happy,” he said. “I did not know exact time of my advantage in the last 10 kilometres of the race. But there was no mutual cooperation between cyclists at the end of the race so I just wanted to maintain a strong pace so the group behind would not catch up with us.”

He was clear in a long-distance break and then made his successful attack 21 kilometres from the line. Race leader Kanstantsin Siutsou (Bahrain-Merida) finished in the bunch and remains eight seconds ahead of Pieter Weening (Roompot-Nederlandse Loterij) heading into the queen stage on Saturday.

“It was a crazy day on today’s stage but we expected that,” Siutsou said. “It was a day for a breakaways and a day for sprinters. It was warm, nice weather, but it was a hard stage. I am very satisfied what we did as a team. Team-mates brought me and Niccolò to a perfect position. In the last kilometre I was on a second position…that was perfect since I am not a sprinter. I hope I will recover and defend my jersey tomorrow.”