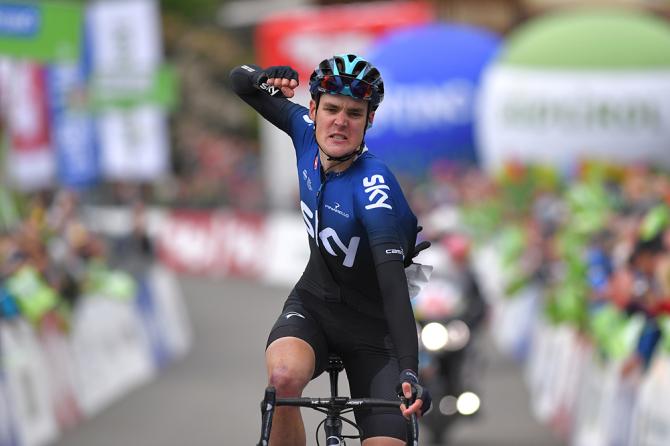 Pavel Sivakov (Team Sky) claimed his maiden professional victory on stage two of the 2019 Tour of the Alps in Schenna, beating Jan Hirt (Astana) to victory on the uphill finish.

The young Russian was active throughout the queen stage and was strong enough to force his way into a late move as the group of general classification contenders split apart on the run-in.

As the road ramped up into Schenna Sivakov timed his final attack, driving clear of the group on the steep slopes. Despite being joined by Hirt ahead of the final kilometre he was able to regroup, before riding the Czech off his wheel on the way to an eight-second race lead and the young rider jersey.

Tao Geoghegan Hart finished 43 seconds down on the stage, 13 seconds behind overall favourites Vincenzo Nibali (Bahrain-Merida) and Rafał Majka (Bora-hansgrohe) who had attacked within the last few kilometres to gain some time.

“We could not wish for a better start to the race: two stages in two wins, it’s unbelievable,” Sivakov said afterwards. “Yesterday Tao had his first pro win and today, I’ve gone mine.”

“We have a really good young group we work together really well,” Sivakov. “Today, the big favourites looked at Tao and I had an opportunity to go in the break, so I have to say a big thanks to him.”

Team Sky domination continues! ?@PavelSivakov gets his first ever pro win as he climbs to victory in stage two of the Tour of the Alps to take the race lead ?#TotA2019 pic.twitter.com/cbGM96Qq02

Tour of the Alps 2019 – general classification after stage 2: