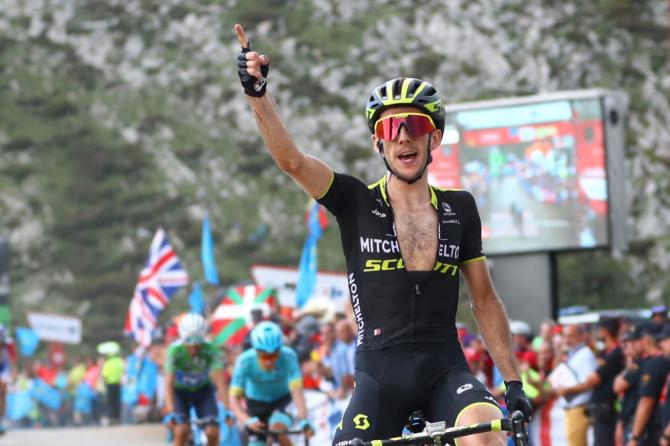 Simon Yates (Mitchelton-Scott) took back command of the Vuelta a Espana after a gutsy ride on stage 14 handed the Englishman the victory on Saturday.

Yates, who held the red jersey from stages 9 to 11, broke free from a splintering group of frontrunners on the winding, technical finish to solo over the line in triumph.

Miguel Angel Lopez (Astana) was second at just a couple of seconds behind with Movistar veteran and 2009 champion Alejandro Valverde in third place.

“I’m a bit happier now, I feel more like I deserve it this time,” Yates said. “I gave everything I could, I’m very happy.

“I chose my moment really well and didn’t look back until it flattened out a little. There was a bit of a gap, so I just gave everything to the line.”

Yates now leads Valverde by 20sec in the overall standings, with the Spaniard’s teammate Nairo Quintana third at 25sec.

“I’m left with the feeling that I could have won,” Valverde said. “It was going very well but I do not want to take anything away from Simon who has been a deserving winner”.

“We are very close in the general classification, all the rivals, and that is good, there is a lot of excitement for the race tomorrow, which can be a very decisive day.”

Former race leader Jesus Herrada had dropped off around the descent of the Mozqueta and the Spaniard never really recovered.

It was Yates’ first stage victory at this year’s Vuelta and the 26-year-old will now be hoping to avoid a repeat of the collapse that saw him throw away a strong lead at the Giro d’Italia in May.

The Vuelta continues on Sunday with the 15th stage, and one the toughest days, lasting 178.2km between Ribera de Arriba and Lagos de Covadonga.