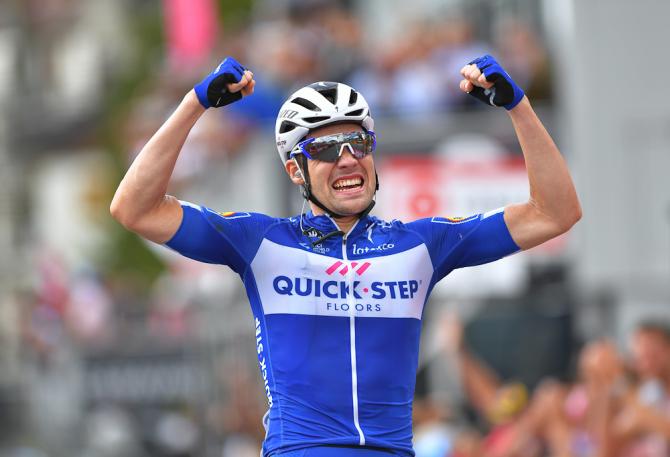 Simon Yates (Mitchelton-Scott) remained in the lead of the Giro d’Italia but the British rider’s advantage over closest rival Tom Dumoulin was slashed in half after the tough 18th stage on Thursday.

Yates was dropped by his rivals on the steep Category 1 climb to Prato Nevoso and he finished 28 seconds behind defending champion Dumoulin, who crossed the line with Domenico Pozzovivo and Chris Froome.

”I was just tired, that’s it. Still a few days to go. I can bounce back, no worries,” Yates said.

Maximilian Schachmann (Quick-Step Floors) won from a breakaway to claim his first victory in a Grand Tour. Schachmann attacked heading into the final section of the climb, finishing 10 seconds ahead of Ruben Plaza and 16 ahead of Mattia Cattaneo.

”The final kilometers were really, really hard,” said Schachmann, who rides for Quick-Step Floors. ”I knew I had a good chance from the breakaway. I tried to play it safe, to not attack too early. It was really hard, we are already on stage 18 so no one has fresh legs anymore.”

Yates’ lead was cut to 28 seconds heading into the final three days of the Giro, which includes two brutal days in the Alps before the procession to Rome.

”I always said if I have the legs then I will keep on trying,” Dumoulin said. ”I had the legs today and I tried and it worked. Finally, after two and a half weeks.”

Pozzovivo remained third but was 2:43 behind Yates, with Froome a further 39 seconds behind.

There are four mountain passes on the route up to Bardonecchia on Friday, followed by Saturday’s ”queen stage” up to Cervinia.