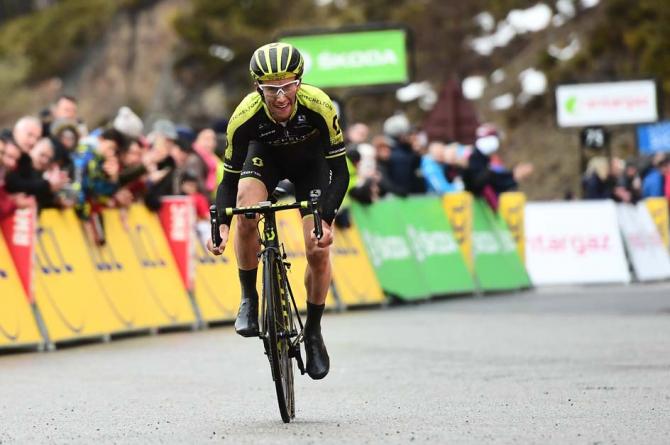 Simon Yates (Mitchelton-Scott) showed his calibre on Saturday when he reached the snow-capped summit finish at La Colmiane alone to take the Paris-Nice yellow jersey with one stage left.

Yates proved to be the strongest as he arrived alone at the mountain-top summit finish of the stage.

“I was very well protected by my teammates,” Yates said. “The day was difficult from the start, but I was able to save energy thanks to the work of my team and at the end I had a little more in the last climb.

“Astana kept the pace high and then, with Roman, we decided to accelerate and I went off.”

Yates finished eight seconds clear of Dylan Teuns (BMC) and Ion Izagirre (Bahrain-Merida), the only men able to keep up with him on the steeper slopes.

Team Sky’s Sergio Henao was 46 seconds behind and Jakob Fuglsang of Astana 48, while overnight leader Luis Leon Sanchez ran out of gas six kilometres from home.

Four riders will start the last day separated by only 13 seconds. The 25-year-old Yates leads brothers Ion and Gorka Izagirre by 11sec and 12sec while Wellens is fourth at 13sec.

The last stage will start and finish on the Promenade des Anglais and roll for 100 kilometres through the hilly Nice hinterland.

“It will be very tight, the Izagirre brothers are very good riders,” Yates said. “I expect aggressive racing but I have a good team behind me.”

Wellens knows that he is still in with a chance, despite sitting in fourth place overall.

“It’s still possible,” said Wellens. “I know the route very well. I won there two years ago and that is a great memory. But I will need good legs to succeed.”

The weather has made the race difficult and there were more notable retirements on Saturday including Frenchman Arnaud Demare with FDJ, who is being protected for the Milan San Remo, and also Dan Martin, who was suffering with illness.