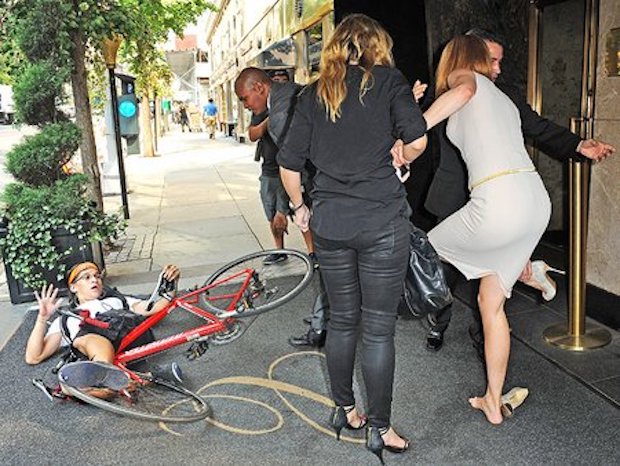 Sidewalks look like the safer option for urban cyclists, especially when there are a lot of cars on the road. But riding on a sidewalk doesn’t remove the threat of crashing into a car.

Timothy Donelson, a lifelong D.C. resident, learned this lesson the hard way when he was sidewalk cycling.

“I was coming down, about to go into the street from the sidewalk. I went through the crosswalk and this car — I didn’t even see him coming — he came out of nowhere,” Donelson says. The car hit Donelson and he ended up in the hospital with back injuries.

The law in the state of Washington provides as follows: “Every person riding a bicycle upon a sidewalk or crosswalk must be granted all of the rights and is subject to all of the duties applicable to a pedestrian by this chapter.”

While this statute gives cyclists the rights to ride on sidewalks, Washington Administrative Code sets forth a Model Traffic Ordinance which city governments may incorporate into their local traffic codes which provides as follows:

In the past decade, bike infrastructure in cities around U.S. has expanded significantly. One of the biggest areas of growth is in the number of bike lanes. In D.C. for example, there are now 78 miles of bike lanes; up from three miles in 2001. But of those 78 miles, only six are protected.

“Bike lanes need to be built in a way that takes the road into context,” says Colin Browne, a member of the Washington Area Bicyclist Association. While protected bike lanes are proven to reduce sidewalk ridership and get more people on bicycles, they aren’t needed everywhere.

“If cars aren’t moving fast and there’s lots of people, a bike lane that’s just paint is OK,” he said.

Bicycling advocates like Browne say the answer is for cities to create a network of conventional and protected bike lanes along with bike trails.