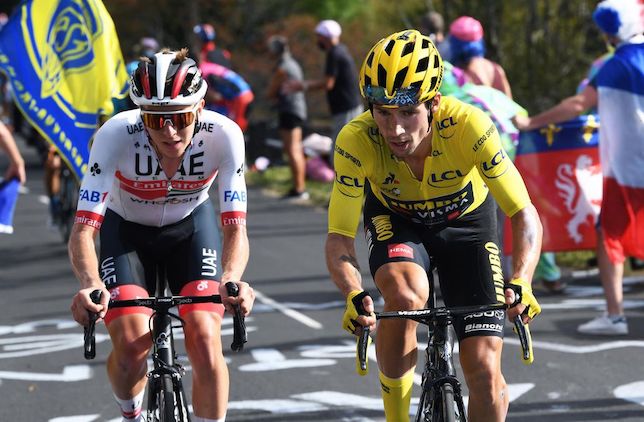 (Reuters) – The Tour de France is Primoz Roglic and his Jumbo-Visma team’s to lose after defending champion Egan Bernal imploded in spectacular fashion on Sunday, but his fellow Slovenian Tadej Pogacar lies in wait ahead of the final week.

Roglic leads by 40 seconds ahead of Tuesday’s mountain trek between La Tour du Pin and Villard de Lans. Second-placed Pogacar appears to be the only credible threat to the Vuelta champion after Colombian Bernal dropped out of contention when he cracked in the ascent to the Col du Grand Colombier.

Pogacar won at top of the unforgiving climb ahead of Roglic to claim his second victory on his Tour debut.

But while Roglic can rely on an awe-inspiring team in the mountains with Tom Dumoulin, George Bennett, Sepp Kuss and Wout van Aert setting a devilish pace on the climbs, Pogacar is often on his own and can only count on his own legs to make a difference.

“So far everything is going according to plan, but we are not there yet,” Roglic, a man of few words, told reporters.

“Pogacar is more explosive, but he doesn’t have a team around him and if he’s in trouble he won’t have anyone to help him,” Philippe Mauduit, sports director at French team Groupama-FDJ, told Reuters.

Pogacar lost 1:20 when the peloton was split by crosswinds in the seventh stage, and he has been making up for lost time since then, regaining half of it thanks to sharp attacks, notably in the Pyrenees.

“The plan is to win the Tour de France. Primoz Roglic seems unstoppable but today Bernal cracked and maybe one day myself or Primoz will crack – there are still a lot of opportunities ahead,” Pogacar said.

Pogacar can also expect to take time on Roglic in the final time trial on Saturday, having beaten him in the Slovenian national championship in the solo effort against the clock.

Behind the Slovenian duo is Colombian Rigoberto Uran, 1:34 off the pace.

The race, however, will not be the main focus on Tuesday morning before the start of the 15th stage as teams await the results of their COVID-19 tests. The rules state that should a team have two cases, the whole outfit will be thrown out of the race.

Four teams, Ineos Grenadiers, AG2R-La Mondiale, Mitchelton-Scott and Cofidis, have been on a knife edge since the previous round of tests last Sunday and Monday when one of their staff members tested positive, but the day-count has been reset for the second round.