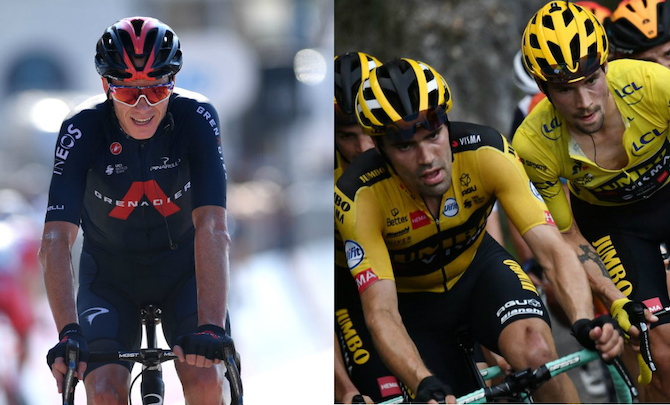 (Reuters) – Primoz Roglic will be looking for more redemption after his Tour de France heartbreak as he prepares for Vuelta a Espana as Chris Froome bids farewell to Ineos-Grenadiers after 11 years with the British outfit.

Roglic, who lost the Tour on the last competitive stage to his compatriot Tadej Pogacar, won Liege-Bastogne-Liege and is in prime position to retain his title in Spain when the race begins on Tuesday.

Backed by a strong Jumbo-Visma team featuring top climbers Sepp Kuss and George Bennett, Roglic is well armed for one of the toughest first weeks in a grand tour, featuring three mountain-top finishes after the planned Grand Depart from the Netherlands was scrapped amid the COVID-19 crisis.

Jumbo-Visma will be at full strength for the Vuelta, with Roglic co-leading the team alongside former Giro d’Italia champion Tom Dumoulin.

“During the Vuelta it will become clear who will be our main man. Our team is at the start with two favourites for the final victory, one of them is last year’s winner”,” said sports director Grisha Niermann ahead of the first stage in Irun.

Their main rival is expected to be 2019 Giro champion Richard Carapaz, whose target this season was the Italian race before he was included at the last moment in the Ineos-Grenadiers squad for the Tour after Froome and Geraint Thomas were omitted because of poor form.

Four-time Tour champion Froome, also twice a Vuelta winner, has yet to recover his top form after a freak crash last year and the Briton will be eager to leave Ineos-Grenadiers at the end of the season in style.

But the 35-year-old, who will ride for Israel-Start Up Nation next year, has not made it into the top 10 of any race since taking third place overall in the 2018 Tour and seeing him among the top contenders would be a huge surprise.

“I think it’s quite hard to say where I am at the moment given that I haven’t done many stage races recently,” Froome said.

“Signs in training have got better and better and I am feeling more like myself again, which is fantastic. It’s hard to quantify that when I haven’t been able to race against rivals.

“After the first few stages, I will be able to have a more clear plan for the rest of the race, and know what kind of job I can fulfil at that point.”

Other contenders include Thibaut Pinot, a stage winner on all three grands tours and a former Tour de France podium finisher whose chances in his home race were ruined after he sustained a back injury in a first-stage crash.

The top guns have already marked two stages where the race could be won or lost – the sixth ending on top of the Col du Tourmalet in France, where Pinot won on the Tour last year, and the 12th, finishing atop the brutal ascent to the Angliru.