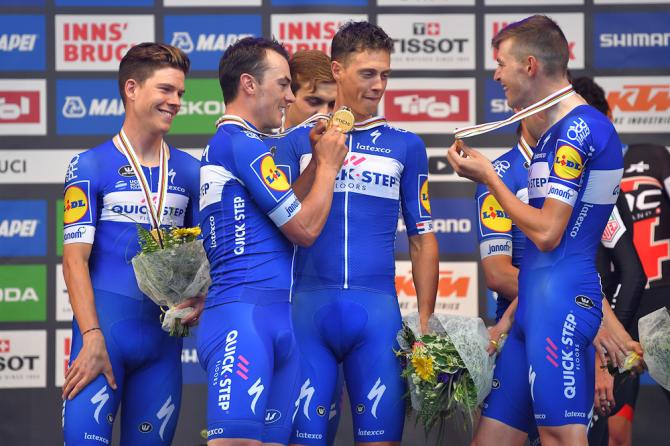 Quick-Step Floors capped a fabulous season by racing to gold in the World Championships team time-trial on Sunday, fending off defending champions Sunweb by 18 seconds.

Quick-Step came over the final summit behind Sunweb but, led by big guns Bob Jungels, Yves Lampaert and Niki Terpstra, made the difference on the final descent and flat section to triumph on the 62.8km course.

Team captain Lampaert said Quick-Step had targeted the win and been surprised how tough the race was in the end.

“We went full, full, full gas on the descent to the finish,” he told press after the win. “To win the Worlds team time trial is really special,”.

Terpstra said he used his mobile phone to plan their tactics after training on the route.

“We really trained the downhill very well, we had the video and I played it 100 times yesterday on my phone to watch every corner,” he said.

“After eight years in the team, it’s the best present I can get from and give to the team,” said Terpstra who won two key classics earlier this year.

The 2018 world championships will be the last to feature ‘trade teams’. Although reports are as yet unconfirmed, they look set to be replaced by national teams.

Team Sky were fourth, another 20 seconds back, with Mitchelton-Scott in fifth 56sec off the winning pace.