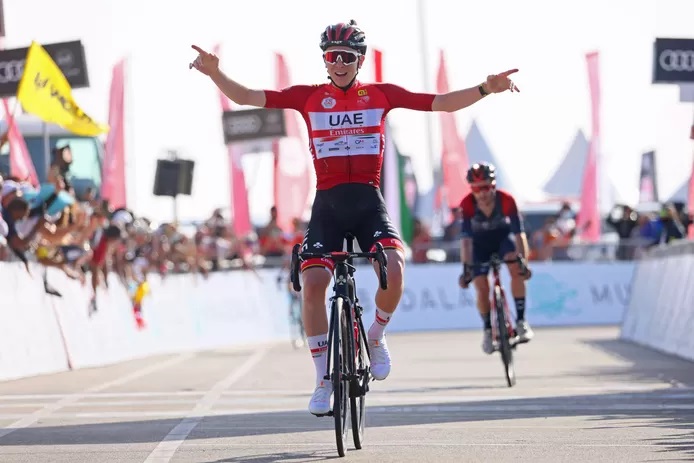 Tadej Pogacar retained the UAE Tour title, demonstrating his domination on Saturday by sprinting away from his main rival Adam Yates at the end of the final climb.

The Slovenian entered the final stage with a four second lead over Filippo Ganna. But Yates was the most realistic challenger on a 148km that ended with a tough climb up Jebel Hafeet.

Yates attacked but, as the rest of the pack dropped away, Pogacar stuck to his wheel, before stepping on the pedals and surging away round the final pair of hairpins.

“At one moment I was really suffering but luckily Adam also slowed down a bit,” said Pogacar. “I was in the lead in front of him, so I didn’t need to attack and make seconds. I was just trying to follow. His attacks are one of the best attacks in the world.”

Pogacar crossed the line a second ahead of Yates, with Pello Bilbao of Bahrain-Victorious finishing third five seconds back.

“It is the first race of the season but for us it is one of the most important,” said Pogacar, who at 23 already has 33 major victories including two Tour de France titles.