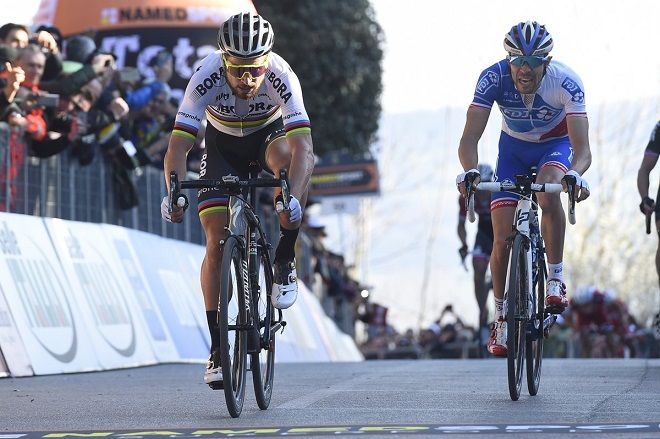 Peter Sagan (Bora-hansgrohe) stormed to victory on stage 5 of the Tirreno-Adriatico with a masterful sprint that beat Thibaut Pinot (FDJ) into second place. Nairo Quintana (Movistar) retained the overall lead.

209km and a rolling profile would separate riders from the start in Rieti and a chance for victory in Fermo. The first 100km were gentle enough – a steady climb before an equally steady descent, but from here the whole character of the day would change, with one gradual climb replaced with a sawtooth profile for the rest of the stage. If the parcours wasn’t hard enough, the final kilometre brought with it a 22% ramp before a 10% scramble to the finish. This was a finale that didn’t suit any one type of rider and anyone could take the win.

As expected, a break went off early on – trying to make the most of the more gradual start to the day before the really hard climbs began appearing on the horizon. A group of eleven bumped their advantage up to four minutes, but not long after were reeled back in to a more manageable two minutes.

With 90km remaining, it was all back together, only for another break to go at the 80km mark – this time a much bigger group of thirty, with another smaller group attacking off the front of this one.

The final 35km were cruel – with multiple steep ramps followed by equally steep descents – sapping the energy from the riders’ legs and bringing the escape back within touching distance. The whole peloton was doubtless thinking about the final 22% ramp that would prove decisive, and were saving their legs.

Picking off riders one by one, Peter Sagan took to the front on the 22% final ramp as the cobblestone streets narrowed, finally kicking and leaving everyone behind to take the win.

“I felt very bad today, but I am very happy for this win”, said Sagan. “It was looking like I wouldn’t be able to race tomorrow – all day it was full gas, with everyone attacking. I don’t know if the other riders saw the profile? Rafał Majka was the guy who put his trust in me today. I said to him not to be stupid – that we’ll go together, and if he had the legs he’d go. He worked for me and trusted my ability more than I did. I was actually dropped in the last climb, but just got back in the final kilometre. After that I did my best and am very happy with the victory.”