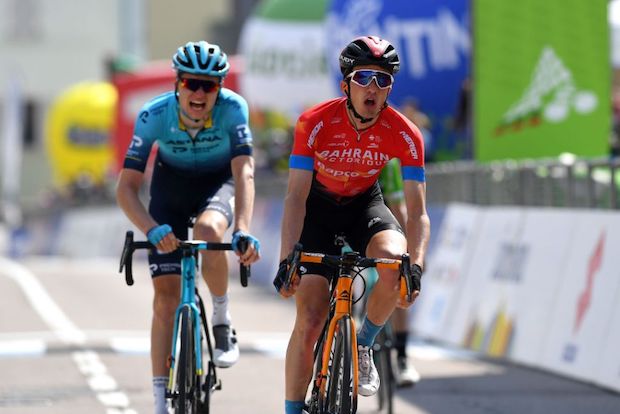 Pello Bilbao won a three-man sprint to take the fourth stage of the Tour of the Alps on Thursday as Simon Yates kept the race lead going into the final day.

The Bahrain Victorious rider edged Aleksandr Vlasov of Astana with Yates third in the ‘queen stage’ of this year’s race from Naturno to Pieve di Bono in northern Italy.

Vlasov and Yates crested the day’s last peak seven kilometres from the finish and looked set to duel for victory. But the 31-year-old Basque rider caught the leaders with a breakneck steep and technical descent and took the lead in the sprint to the finish.

Bilbao moved up to second overall nearly a minute behind Yates with Ineos Grenadier’s Pavel Sivakov, the defending champion, losing time on the final climb to slip to fifth overall.

“I tried to stay safe on the descent, Bilbao is an excellent descender,” said Yates. “From a general classification point of view it was a good day. Anything can happen but we will try our best tomorrow and see from there.”