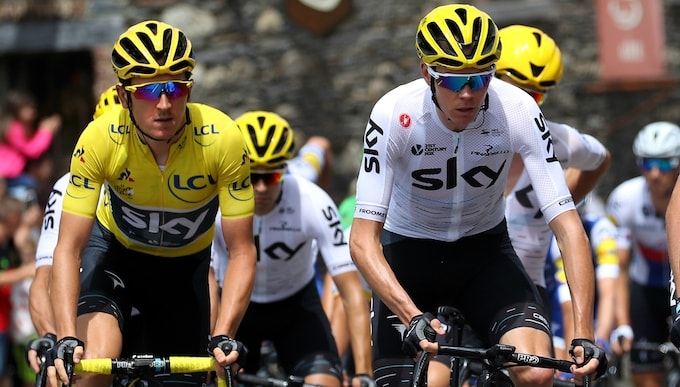 Will Chris Froome attack Geraint Thomas, or will the defending champion support the current yellow jersey holder? That is the question on everyone’s lips as the Tour de France heads into its final week.

But four-time champion Froome, who trails his fellow Briton by 1 minute and 39 seconds before the race hits the Pyrenees, insisted on Monday that the non-aggression pact would not be broken as Team Sky are focused on winning the Tour with one or the other leader.

“It’s not up to us to be attacking. It’s for all the others to make up time on us and dislodge us from the position we’re in.”

Tom Dumoulin and Primoz Roglic are third and fourth overall, 1:50 and 2:38 off the pace, respectively, with Romain Bardet and Mikel Landa further down but still a threat.

The race could be decided in Wednesday’s 17th stage, a 65-km brutal up-and-down trek from Bagneres-de-Luchon to Saint-Lary-Soulan featuring grueling climbs and two tricky descents with almost no flat part.

The terrain will be perfect for those who dare, and Bardet and Landa are widely expected to set off fireworks.

“It’s going to be war out there. It’s the last mountain top finish that will prove most decisive,” said Thomas. “It’s going to be on the hardest climbs, the final climb finishes at altitude so you can’t get too carried away at the start that’s for sure.”

Cycling’s unwritten rule suggest that the yellow jersey should not be attacked by a team mate but Froome has been designated as the main leader and with six grand tour titles under his belt, he should be allowed to by Sky.

But the British outfit’s prime target is to win the race, whether it is with Thomas or Froome, who was asked if he would be ready to sacrifice his own chances to help Thomas win his maiden Tour title.

“Yes,” he replied. “As long as there is a Team Sky rider on the top step of the podium in Paris, I’m happy.”

Sky, however, are one rider down after Gianni Moscon was kicked out of the race on Sunday for hitting a French rider, which will do little for the team’s popularity in France.

“It’s disappointing but there’s nothing we can do and what’s done is done. We just concentrate on the last week,” said Thomas.