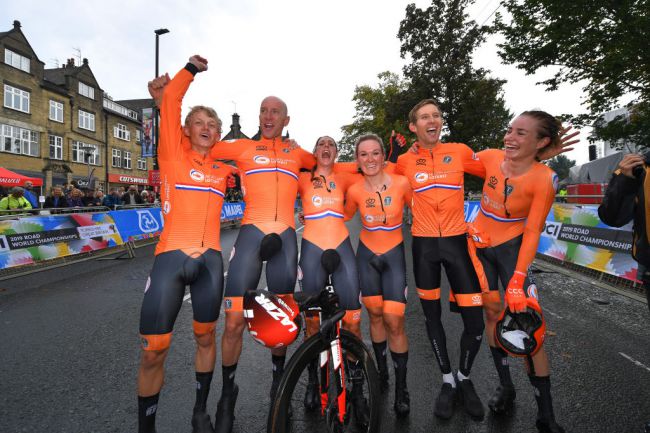 The Netherlands won the first gold medal of the 2019 Road World Championships in Yorkshire after triumphing in the mixed relay team time trial.

The first edition of this event was over a total distance of 28 kilometres. A group of three male riders first tackled the 14-kilometre circuit and after they crossed the finish line, the three female riders went through the same route and the final time was taken after the second woman of each team crossed the line.

Stellar names like Tony Martin, Elia Viviani and Tadej Pogacar all took part, but Primoz Roglic – who was expected to ride – was replaced late on by young Jaka Primozic.

Great Britain chose a young team, but it was a team with plenty time trial pedigree. Harry Tanfield, Anna Henderson and the rest really gave their all, emptying themselves all the way to the line, that and a late puncture for Italy’s Elisa Longo Borghini and a comedy of errors for Elise Chabbey of Switzerland meant that they held on to a medal position with bronze.

The Dutch team of Lucinda Brand, Riejanne Markus, Amy Pieters, Koen Bouwman, Bauke Mollema and Jos Van Emden were the pre-race favourites, and lived up to that tag with a dominant display.

A near collision between team mates Mollema and Bouwman was the only rocky moment for the Dutch as they won the race in a final time of 38min 27sec.

Competition continues tomorrow, with the first individual time trial events again taking place in Harrogate.  The junior women’s race over 13.7km takes place in the morning, with the 27.6km junior men’s race in the afternoon.