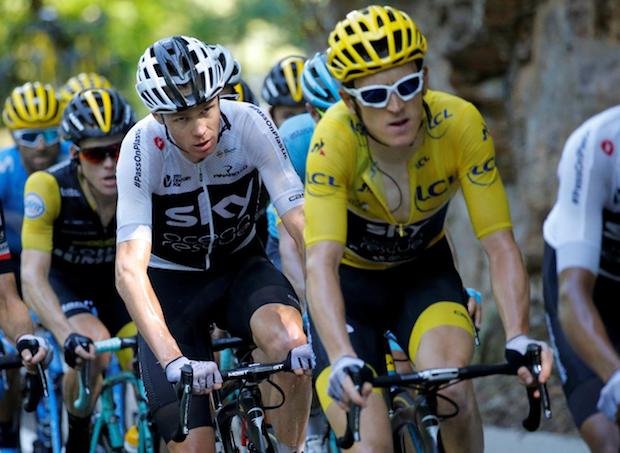 The Tour de France is set for its moment of truth on Wednesday as the peloton prepares for a brutal 17th stage that could decide whether leader Geraint Thomas or defending champion Chris Froome will wear the yellow jersey in Paris.

It could, however, also open the door for a challenger to emerge and Tom Dumoulin is one of those lying in wait for the top two to slip up.

Should he gain time on Thomas, the world time trial champion could still pip the Team Sky duo in Saturday’s solo effort against the clock.

Thomas leads fellow Froome by 1:39, with Dumoulin 11 seconds further back before Wednesday’s savage 65-km trek that ends with the much-feared climb up the Col du Portet, a lung-busting 16-km ascent at an average gradient of 8.7 percent.

“This stage is going to be massively decisive, there are going to be big gaps,” said Thomas. “You can’t get carried away at the start because the last climb is one of the hardest of the Tour.”

Riders with an outside chance of winning, or making it to the podium on the Champs Elysees, will, however, be tempted to blow up the race from the start, with Romain Bardet, fifth overall and an excellent descender, the main suspect.

“It will be important to be steady on the descents, you can easily make a mistake,” warned Thomas. “Everyone is a bit apprehensive about this stage.”

Team Sky have said that Thomas and Froome will not race against each other, but the four-times champion is a far better descender than the yellow jersey holder, and knows he must take time off of his team mate to stand a chance of winning the race for a record-equaling fifth time.

“In that final climb anything can happen,” said Thomas. “We may find ourselves having to chase someone or together in front. There could be big gap, and different scenarios, as long as we don’t race against each other.”

To spice things up, as the stage begins with a climb, organizers have decided that the riders will line up at the start in a grid formation based on the overall standings.

The idea, however, has been dubbed as purely cosmetic by riders and team staff.