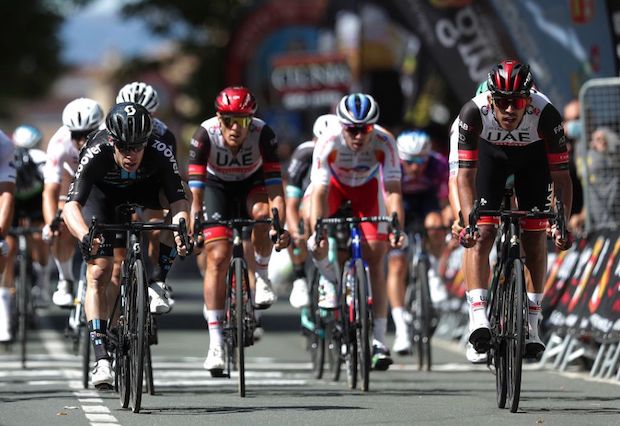 Sebastian Molano claimed his first win of the season after a bunch sprint on stage 2 of the Vuelta a Burgos.

You can rewatch STAGE 2 of 2021 Vuelta a Burgos HERE

The win came after a hard chase effort from his UAE teammates to control the five rider breakaway which came back inside 15km from the line.

An uncategorised incline inside 5km to go saw a dangerous 3-man group jump clear in a move that looked like it may go to the line. Then deep inside the final kilometre Matteo Trentin put in a strong turn to deliver Molano to the line in a tight finish where he would claim his 14th career win and his first on European soil.

The podium was rounded out by Alberto Dainese (DSM) and Trentin, who hung on for third after delivering an excellent leadout for the Colombian.

“Firstly I’d like to say thanks to my teammates for their spectacular work today. They showed a lot of faith in me and this win is a thank you to them. It’s been a long time since my last victory and it feels really good”, said Molano.

Tomorrow will see the first big shake up of the general classification as the riders go from Busto de Bureba to Espinosa de los Monteros (173km) which includes the climb of Picón Blanco.