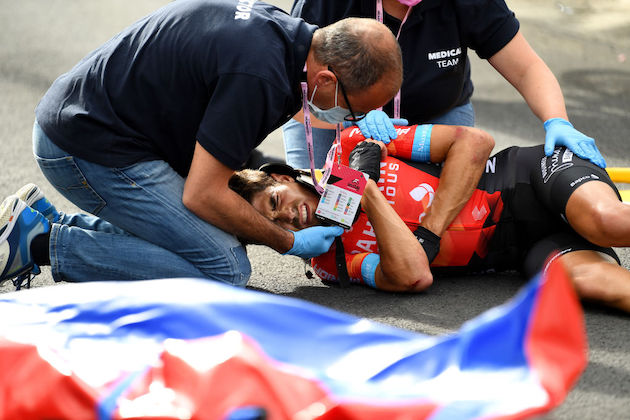 Mikel Landa crashed hard in the final kilometers of the Giro stage 5 after a collision with a traffic island.

After his fall, Landa was taken to Riccione hospital, where he was treated for a collarbone fracture and several broken ribs. The Spaniard will stay in the hospital for observation tonight. He is also being investigated further.

Bahrain Victorious also announced that Landa remained conscious after his fall and is already looking forward to getting back on the bike as soon as possible.

“It was painful to see when I drove past it. We do not know if it is his collarbone or his wrist ”, sports director Franco Pellizotti said right after the crash. “Our riders were all together in the fast phase of the final. I understood that Landa was involved in a collision with a road sign and fell. He was our leader and came here to win.”

“From tomorrow the Giro will continue for us with Bilbao and Caruso, but we sympathize with our leader. He was fine, the squad was good, but these things are part of the game. On paper it was an easy stage, but we knew it would be treacherous. We went through towns and cities and we all know what those streets are”, said Pellizotti.