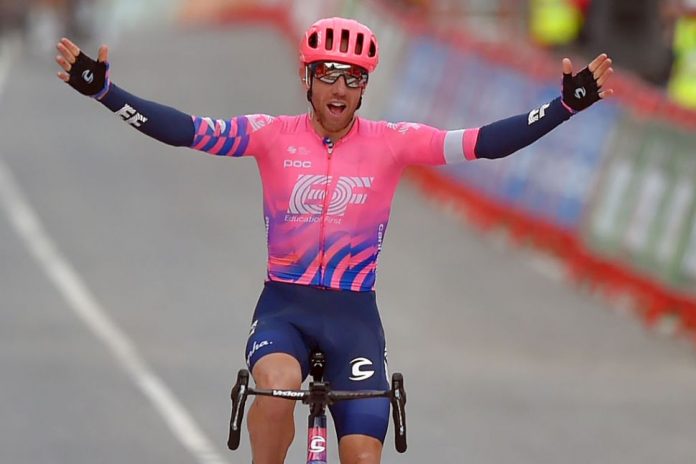 Michael Woods claimed a second career win on the Vuelta when he prevailed in the seventh stage, a 159.7-km hilly ride between Vitoria-Gasteiz and Villanueva de Valdegovia on Tuesday.

The EF Pro Cycling rider attacked from a five-man leading group, 1.5km from the finish, to beat Omar Fraile and Alejandro Valverde, who were second and third, respectively.

Overall leader Richard Carapaz retained the red jersey as he crossed the line among the major contenders, 56 seconds off the pace.

In an explosive start to the stage, a large breakaway took shape and Woods, whose general classification hopes ended with a crash in the first stage, attacked three kilometres from the top of the last climb, the Puerto de Orduna.

Woods was caught in the descent by Valverde, Fraile, Guillaume Martin and Nans Peters.

The Canadian however had some gas left in the tank in the finale, attacking decisively with nobody able to get into his slipstream with the one-kilometre mark in sight.

Wednesday’s eighth stage is a 164-km mountain ride from Logroño to the Alto de Moncalvillo.