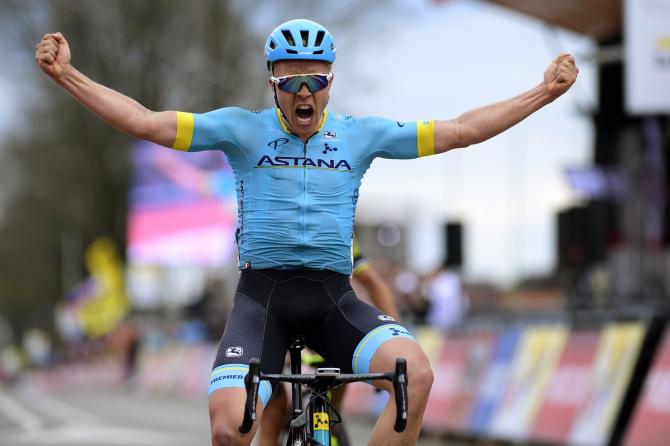 Dimension Data have announced the signing of Michael Valgren who will be joining the team from January 1, 2019, having signed a two-year contract.

2018 highlights for Valgren include victory in the Amstel Gold Race, sealing the biggest win of his career. This followed his earlier win in February as he captured the Omloop Het Nieuwsblad title, making the decisive break with just over 2km to go and soloing to an impressive victory. He also finished fourth at the Tour of Flanders.

“I’m extremely excited to be joining Team Dimension Data for Qhubeka,” commented the rider. “It’s a big opportunity for me to go to a team that’s keen on really building its Classics squad. I really look forward to working with the guys on the team and I see a big future there for myself.

“I’m also really proud to join the team because of what it stands for: its mission to distribute bicycles through the Qhubeka charity. It’s a super-cool mission and I’m really looking forward to being a part of that. Right now I can’t wait for 2019 to get going on my new BMC bike, which is obviously also really important these days – the equipment. In that regard Team Dimension Data is right on top of things so I’m sure there will be some great, great years ahead.”

Valgren has started four times in the Tour de France and once in the Vuelta a España. “Michael joining us is a huge coup for Team Dimension Data for Qhubeka,” said Team Principal Douglas Ryder. “He’s been one of the stand-out riders in 2018, with his victories early on in the year backed up by really strong performances at the Critérium du Dauphiné and at the Tour de France. Michael signing is another step in our journey to the top of the sport, in particular, gives a major boost to our Classics campaign, where he showed such good form earlier in the year.

“Equally important though is how impressed he’s been by the Qhubeka charity and the opportunity he now has, as one of our riders, to make a meaningful impact in changing lives through bicycles. We can’t wait to get started with him as we continue to build towards our ambitious Vision 2020 goal.”