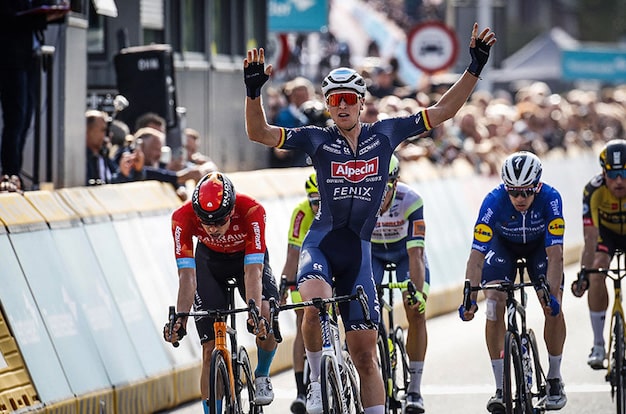 Tim Merlier of Alpecin-Fenix continued his fine season by winning the opening stage of the Benelux Tour in Dokkum, northern Netherlands.

You can rewatch STAGE 1 of 2021 Benelux Tour HERE

Merlier has won stages on the Giro d’Italia and the Tour de France this term and with the peloton smashed into small groups due to strong wind the 28-year-old won a sprint from a small group ahead of Phil Bauhaus and Alvaro Hodeg.

Remco Evenepoel had been in the lead group until he got a puncture 28km from the finish, but this was only the start of his troubles.

The neutral mechanic used a wrong replacement wheel, mistaking back for front, and then struggled to take it off again, causing Evenepoel to lose over a minute.

“It was extremely hectic,” said Merlier. “I don’t know how, but it just happened. I had to do a sprint for that echelon. From then on I knew that I had to play along and not let myself be surprised on the crucial points.

“I felt good in the final, but it was difficult. There was also an attack, but Gianni [Vermeersch] was the ideal man for that. He could respond to anyone. In the end everything worked out and it is a great victory for the team.”

Tuesday’s stage is an 11km individual time-trial also in the Netherlands in a race whose finale is in Grammont in Belgium on Sunday.