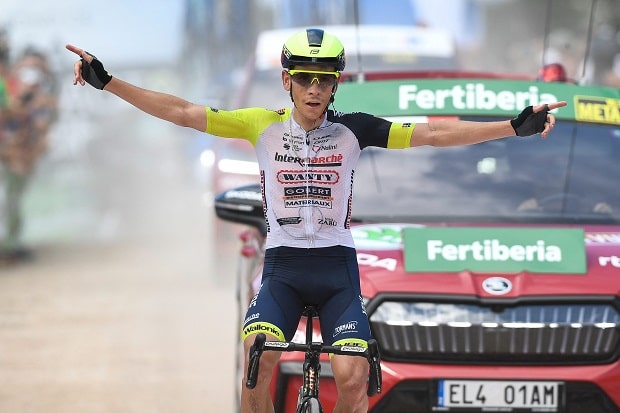 Louis Meintjes powered to victory in stage nine of the Vuelta a Espana with a lung-busting solo effort on Sunday as Remco Evenepoel extended his lead at the top of the general classification.

It was Meintjes’ maiden stage win at the Vuelta as he emerged the strongest among the nine-man breakaway group, finishing more than a minute ahead of Italian duo Samuele Battistella and Edoardo Zambanini.

Victory had seemed out of reach for Meintjes when Battistella and Jimmy Janssens broke away in the final 10km but the Intermarche-Wanty-Gobert rider made a remarkable recovery to go past them with 2.5km to go and claim the biggest win of his career.

“It’s something really special, I think it still needs some time to sink in. I’ve actually never been on the podium of a World Tour race except for team classifications,” said Meintjes after his first Grand Tour stage win.

“The last few days in the mountain finishes I was just not quite fast enough to keep up with the general classification guys. Then if I don’t get a result that way, the best is to go in the breakaway. It worked out perfectly today.”

Evenepoel put in another strong showing, pulling away from his general classification rivals in the closing stages to cross the line fourth and open up a minute 12-second lead over Enric Mas.

Three-times defending champion Primoz Roglic struggled on the 171.4km course from Villaviciosa to Les Praeres, fading towards the end and falling almost two minutes behind Evenepoel in the overall standings.

Monday is a rest day before the riders embark on a 30.9km individual time trial from Elche to Alicante on Tuesday.