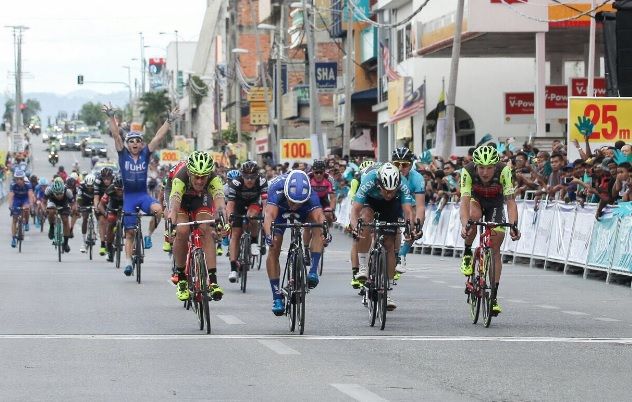 It was a long but eventful day of racing from the East Coast to the jungle via the Titiwangsa Range. It started with a crash involving Pozzato and taking Terengganu’s sprinter Harrif Saleh out of the race as he hit a rock. 49 kilometres were covered in the first hour, making it impossible for anyone to escape from the peloton but a group of 16 riders eventually rode away but the presence of the likes of Jacques Janse van Rensburg (Dimension Data), Bernardo Suaza (Manzana-Postobon) and Robbie Hucker (IsoWhey Sports Swisswellness) forced Androni Giocattoli to chase. Attracted by the King of the Mountains competition after losing hopes of winning the overall classification after a crash in stage 1, John Ebsen (Infinite AIS) went on his own 90km before the finish in order to score important points atop Titiwangsa. The selective terrain reduced the bunch to fifty riders only.

Italy’s Pozzato was close to add his name to the record of stage winners at Gerik after his prestigious compatriots Gianni Bugno in 1997 and Rinaldo Nocentini in 1999 but McCabe outclassed him at the very end of a tight finish. “My day started with a crash while I was in the middle of road at the back of the peloton in order to not risk anything”, Pozzato explained.

“But someone bumped into me after losing control of his handlebar and I fell on my face. My head was shocked by the crash but my legs were going much better than yesterday after the traveling. In the finale I wanted to anticipate the sprint because I’m not as fast as these guys.

But the Unitedhealthcare riders have done a great job as they rode strongly from 1.2km to the end. There was no space for me to attack. When they opened it for their sprinter, I exited on the right side of the road. I hesitated a bit but at the end he was faster than me. It’s a pity because I would have liked to break the ice and take a first victory this year, especially for the team. They need some results after the good work done since the beginning of the year. We’ll try again.”

Third on the line, Gibbons took over from Scott Sunderland in the lead of the overall ranking. “I had a bike change due to a mechanical at about 60km to go”, the South African revealed. “It had a 53 on and I couldn’t get it down to the 11 [gear]. I had a perfect lead out. I thought it was no problem to come round him but I had no speed. I’m disappointed not to win but I’m happy to be in the yellow jersey. It sounds like an excuse but I think I’m quicker than these guys and I want to prove it in the coming days.”

Stage 3 is expected to be a good one for the sprinters, being relatively short (118km) from Serdang to Pantai Remis.

Wout Van Aert: I raced the way I like to race