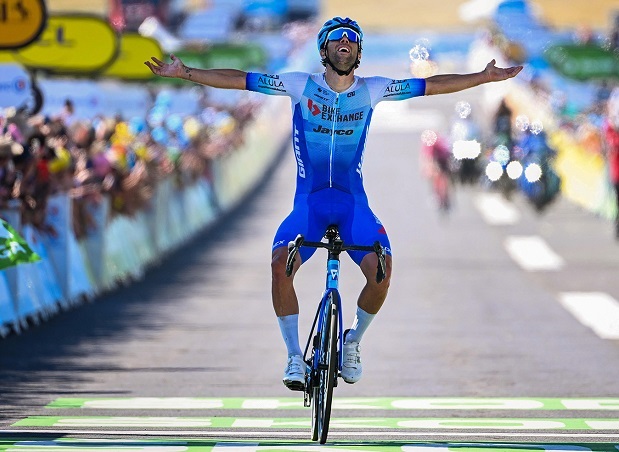 Michael Matthews completed a vintage ride to win the 14th stage of the Tour de France on Saturday, a hilly trek from Saint Etienne to Mende, as Jonas Vingegaard held off defending champion Tadej Pogacar to retain the yellow jersey.

You can rewatch STAGE 14 HERE

Matthews went solo from the day’s breakaway with 51 kilometres to go and after being caught by a trio of chasers he attacked again on the final ascent, a brutal 3-km effort at 10.2%.

Alberto Bettiol managed to rein him in once more, only for Matthews to come back and go solo again to beat the Italian by 15 seconds.

“I’ve always come up second best, third best, top three, top 10 in the last couple of years. I’ve been consistent which is good but you need to win,” said Matthews, who claimed his fourth Tour stage win and his first since 2017.

“My wife told me if you want to win you have to try something new. When Bettiol passed me I thought about my wife and my father who sacrifice so much for me, we don’t get to see each other much. I hope they’re proud of me because that’s why we make those sacrifices.”

Thibaut Pinot came home third as the race’s French riders continue to fight for their first stage win this year. Only twice in the history of the Tour de France have French riders failed to win a stage, in 1926 and 1999.

The group of top contenders was lagging far behind and Pogacar again attacked in a bid to unsettle Vingegaard on the last climb, only for the Dane to follow easily and cross the line on the defending champion’s wheel.

Pogacar had tried to shake things up before, 10 kilometres into the 192.5-km stage, splitting the bunch with an acceleration on a short hill.

Vingegaard was briefly trapped behind but quickly came back after a big effort.

“I tried and I will try again in the coming days,” Pogacar promised. “I tried to put the pressure on from the start.”

Vingegaard added: “I wouldn’t say I was surprised but I was a bit too far in the bunch to jump with him, so I had to close a small gap myself. It did not cost me too much energy.”

The Dane still leads Pogacar by 2 minutes 22 seconds overall, with Geraint Thomas in third place, 2:43 off the pace.

Sunday’s 15th stage is a 202.5-km ride from Rodez to Carcassonne before a rest day.