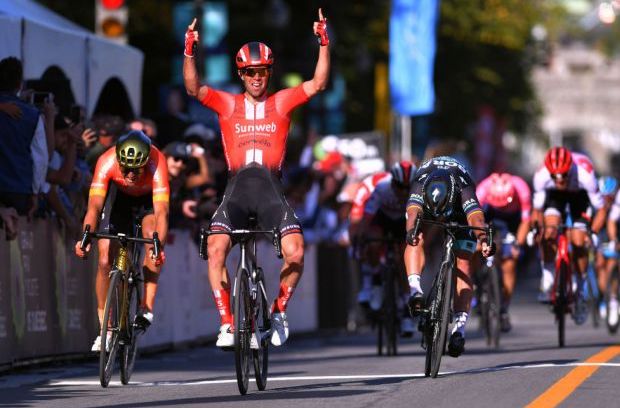 A large peloton started up Cote de la Montagne for the final time. Deceuninck-Quick-Step drove Alaphilippe into the final 3km where he attacked, Sagan, Van Avermaet, Matthews and Diego Ullisi latching on.

At the red kite, Sagan made a dig that Alaphilippe countered. But it would be Matthews repeating as the champion. Sagan was runner-up while Van Avermaet came third for the second time.

The Australian opened up a powerful sprint shutting the leaders down and powering to his second consecutive victory just outside the walls of the old Quebec.

“I’m not exactly sure how I did that,” Matthews said. “I made a big mistake at the bottom of the climb. I wasn’t in a good enough position and when all the big favourites went I wasn’t in the position to go with them. I’m angry with myself about that but they came back and I had the legs for the sprint. It’s a win but I also made a big mistake in the final.

“I was really kicking myself in the final that I wasn’t with the best guys going over the climbs. I’m just lucky that they looked at each other in the final straight. Another reason I dug so deep was because the team rode all day. They rode amazing. I’m just happy that I could finish it off.