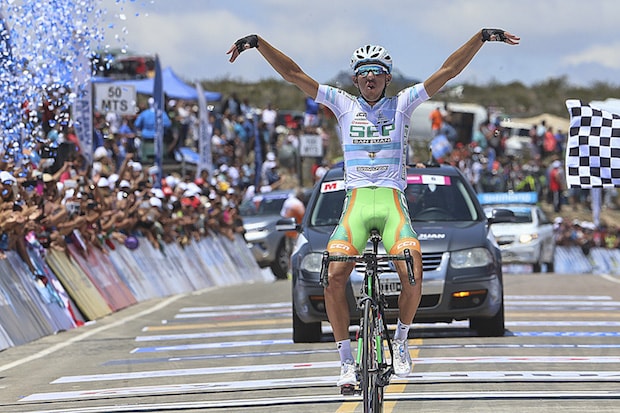 Gonzolo Najar (S.E.P de San Juan) took his biggest result of his career soloing to an impressive victory on the queen stage of the Vuelta a San Juan atop Alto de Colorado.

With around 16 kilometres to go, Najar made his move and attacked taking his teammate Jose Rodriguez with him. At the last kilometres, the Argentinean continued on his own and Oscar Sevilla (Medellin-Inder) and Rodolfo Torres (Androni-Sidermec-Bottecchia) went hunting, but couldn’t close the gap.

“I have to say thank you to all the people here along the roadside,” Najar said. “In my mind I had quite a lot of things in the last kilometre. I felt a lot of support from the people, and thankfully this stage was like we planned in the morning.”

“When we attacked the descent before the final climb, Lotto was starting to push hard and I saw that my legs were good,” he said. “First my teammate Dotti tried and then it was my turn. I think I calculated perfectly my attack.

“I was here two or three times training, and then in the morning we woke up very early at six o’clock in the morning and our sports director showed us a video that motivated us a lot to try and surge the general classification today.”