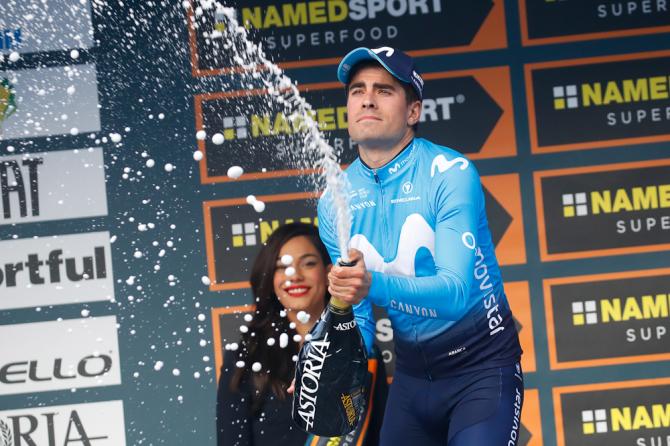 Mikel Landa (Movistar) won a thrilling sprint at the end of the fourth stage of the Tirreno-Adriatico race on Saturday, while Damiano Caruso (BMC) moved into the overall lead.

After a fascinating tussle in the closing kilometers of the steep climb to the finish, Landa accelerated on one of the final bends of the mountainous 219-kilometer route from Foligno to Sarnano-Sassotetto. He held off Rafal Majka (Bora-hansgrohe) and George Bennett (LottoNl-Jumbo) to clinch victory.

Landa rode a quiet race but broke free of the peloton with 2.6 kilometers remaining and caught up with Majka, Ben Hermans, and Fabio Aru, who attacked earlier in the 14-kilometer climb to the finish, at the foot of the local ski slopes.

They were joined by Bennett but no one could respond when Landa charged for the line to claim his first victory for Movistar.

”I let other riders do the work and waited for the right time to go for a final attack,” Landa said. ”I’m in a new team. I’m in a good shape.”

Caruso was the first leader of the race after BMC won the opening team time trial, and he reclaimed the blue jersey on Saturday. The Italian rider has an 11-second lead over Wilco Kelderman with Landa a further 9 seconds behind.

Thomas is fourth, 26 seconds behind Caruso after what looked like a dropped chain with less than a kilometer to go.

”I didn’t exactly expect to be back in the lead today but I felt good in the last climb,” Caruso said. ”I was convinced I could have a good race today. It’s a big result for me to take the jersey at the top of a mountain like this.”

Tom Dumoulin is out of the race after crashing early in the stage. Team Sunweb said the 2017 Giro d’Italia winner didn’t need hospital treatment as he had no fractures but ”sustained multiple bruises and abrasions to his chest, hand, arm and leg.”

The fifth stage on Sunday will pay a tribute to Michele Scarponi as it ends in his hometown of Filottrano after a hilly, 178-kilometer route from Castelraimondo. 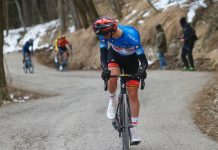 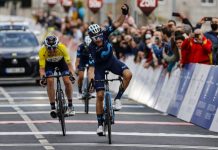