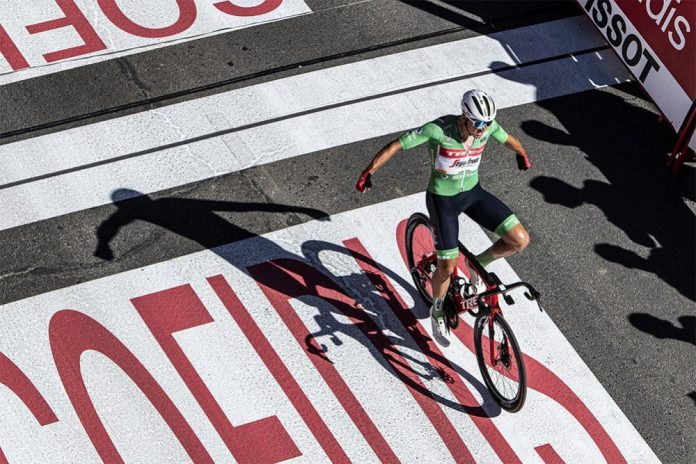 The boys are back from their final rest day but the general classification guys will still have to wait at least another day before having some fun. La Vuelta a Espana 2022 stage 16 is indeed destined for the breakaway or a reduced peloton sprint.

Prior to the depart of La Vuelta a Espana 2022 stage 16, the biggest wish is that the rest day Covid test did no do too much damage. Mads Pedersen seems poised for the green jersey but  the Polka dot jersey and the leader ‘s maillot Rojo are both still very much in play in this final week.

Bryan Coquard, Danny Van Poppel and Pascal Ackermann are yet to win in this year’s Vuelta and will really fancy the finish. Tim Merlier will probably have to wait for Madrid to finally get his win.

Kaden Groves and Mads Pedersen have already won and this will ease the pressure to chase off the respective team. The outcome of the stage will thus rest on the attitude of Team Cofidis, Team UAE Emirates and Team Bora Hansgrohe.

Team Israel Premier tech is in need of some UCI points. They could aim for a stage win with Daryl Impey. Interestingly though, the South African is not among their top 10 riders earning them points, the threatened team will instead have to play the Patick Bevin and Carl Fredrik Hagen cards from a breakaway.

This uphill finish will indeed make the affair of Mads Pedersen took a rather comfortable win on the last uphill sprint with Bryan Coquard coming in second place. Both will however hope to have some help from teams to chase the breakaway.

Breakaway that Team Lotto Soudal will make sure to feature. Thomas de Gendt is the specialist but he will probably be marked from the start. Team Movistar, Team Arkea Samsic and wild card pro teams; Team Burgos BH, Team Euskatel and Equipo Kern Pharma will have the responsibility to also animate the race.

The ultimate favorite of the stage. He is red hot and in an incredible form. The finish suits him very well but with a stage win and the green jersey already in the pocket, how much more can he ask from his team.

Trek Segafredo will probably send either Dario Cataldo or Julien Bernard up the road so that they do not have to chase. The Danish dynamite is nevertheless is such a great shape that he could be in the break again and this time make it till the end.

He had a very impressive  outburst of speed to finish second to Mads Pedersen on stage 13. Team Cofidis have already won with Herada and will need to work very hard to control the stage to have a shot at doubling the tally.

He has a team strong enough to bring him to a sprint finish. The dutch has been so impressive that it would not be a surprise to see the likes of Higuita, Keldermann and even Hindley put down some effort for him.

He is a decent sprinter but his best chance of a stage win will be from the breakaway. If he manages to make it, it will be hard to beat him.

Just like Thymen Arensman, he has been flirting with victory for a long time. While we see him mostly as a breakaway rider, he can also sprint. It will not be a big surprise to see him raise his hands either from the breakaway or the bunch.