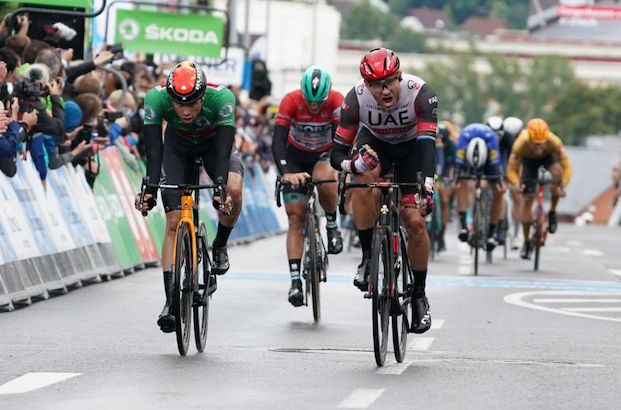 Alexander Kristoff scored his first win of the season in stage 2 of the Deutschland Tour on Friday.

The UAE rider won in the uphill finish over 180.6 km by out-sprinting Phil Bauhaus (Bahrain-Victorious) and Pascal Ackermann (Bora-hansgrohe).

Kristoff faced favourable conditions with cold and rain that suited his characteristics on the final straight of 300 meters on a slight ascent. The Norwegian teamed up with his compatriot Sven Erik Bystrøm for the launch of the sprint, passing Bauhaus at the last moment.

“I like to race in Germany,” said Kristoff at the finish. “I have a lot of my wins in this country. I won a stage here last time [in 2019], and had good memories from that.

“Today it was good conditions for me. In Nice [where he won the Tour de France stage last year] it was conditions like this with the rain, so I usually race quite well in these conditions, even if I don’t really enjoy it. After the race when you’ve won, then you enjoy it, so I’m very happy now.